Thankfully we do not have to force Jude to read, he is a natural reader and really enjoys it.  Our big struggle is finding books that keep him entertained, especially in the summertime when he would rather be enjoying his summer break.  With just a few days left of school you better believe we are all itching for summer break and that means we need to have a plan to kick that summer slide that happens every year!

Kicking The Summer Slide With Percy Jackson & the Olympians 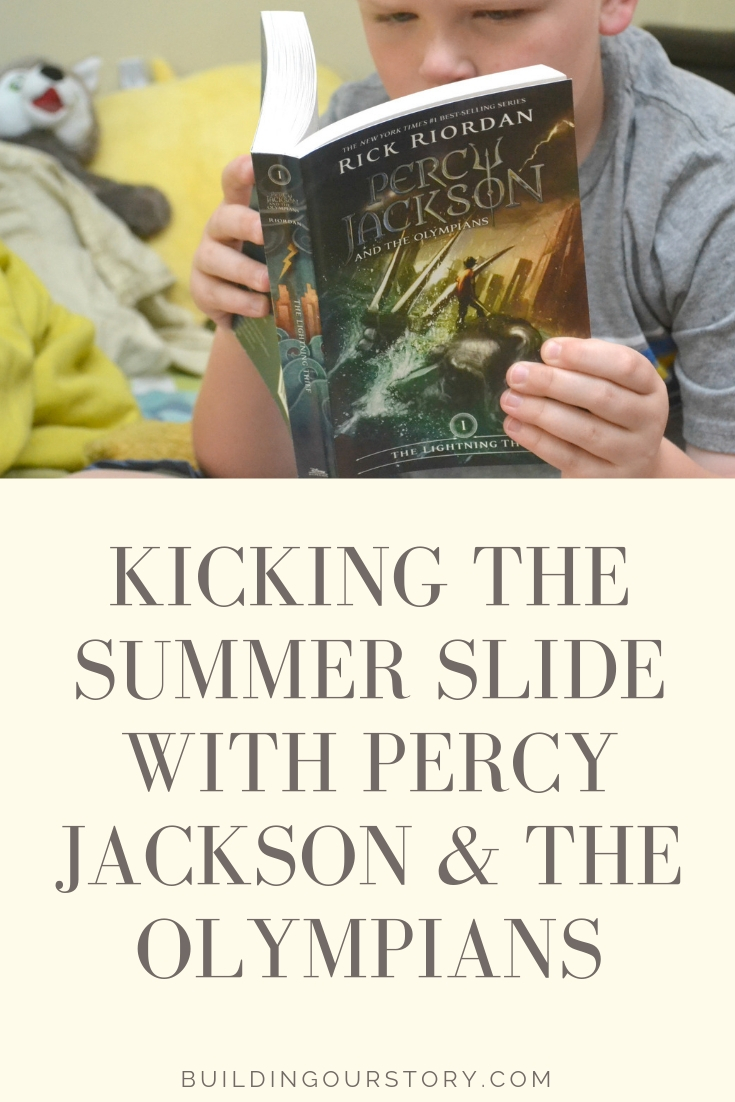 Every summer we have made a trip to the bookstore to stock up on books for the kids.  This is hard with Jude because he has read so many books that are out right now – let me give you an example: in 2018, Jude read 104 books.  These are not tiny books either, he is reading about 4 grade levels higher than he is which means the age appropriateness for books at his reading level are slim pickings! 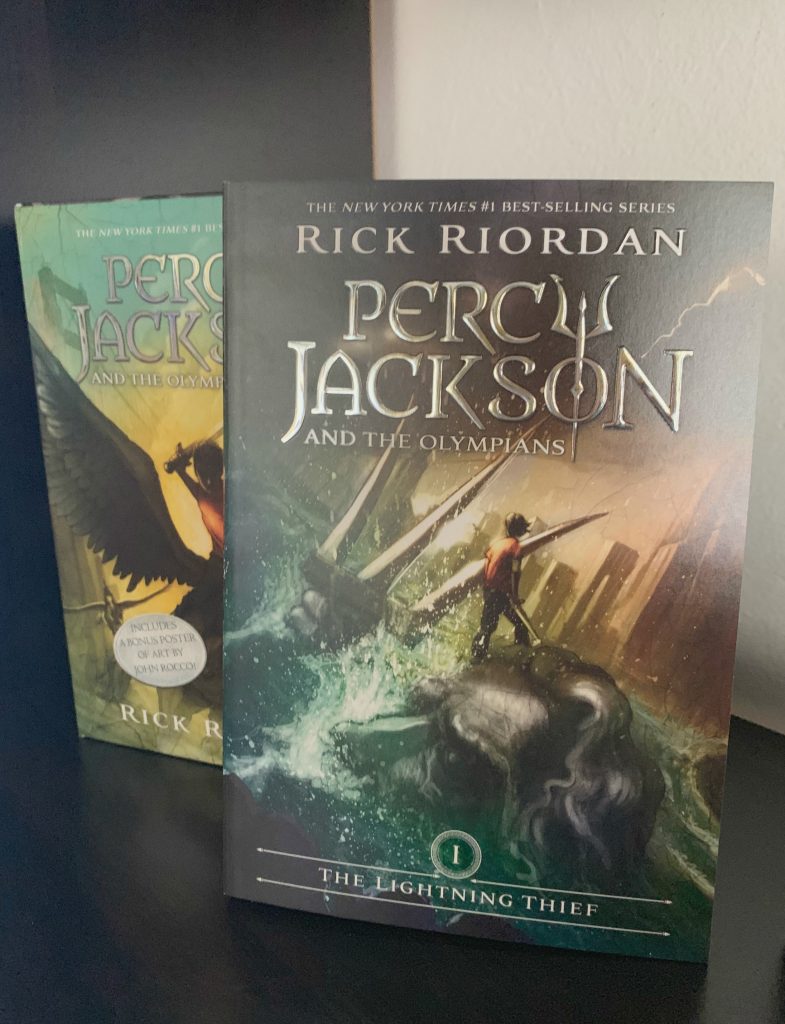 Recently, we were introduced to the Percy Jackson & the Olympians books series.  I started doing some research and instantly knew this five book series would be a perfect way for Jude to kick off his summer reading!  Jude is really into fantasy, dragons and mythological heroes so when he saw the Percy Jackson & Olympians books on our kitchen table he wanted to dig in right away.  I told him he had to wait until school was out – now that I write this, I feel like that was a silly response!  HA!  But the fact is, I know that Jude will be so excited to dive into these books this summer.

Rick Riordan‘s fun, fast-paced Percy Jackson series is perfect for kids who love monsters and mythological heroes. The Percy Jackson series follows the adventures of young demigod (half mortal, half Greek god) Percy and his friends Annabeth and Grover. This series is listed for readers ages 9-12.  Knowing this I think Jude will read these 5 books pretty quickly but I know he will really enjoy them. 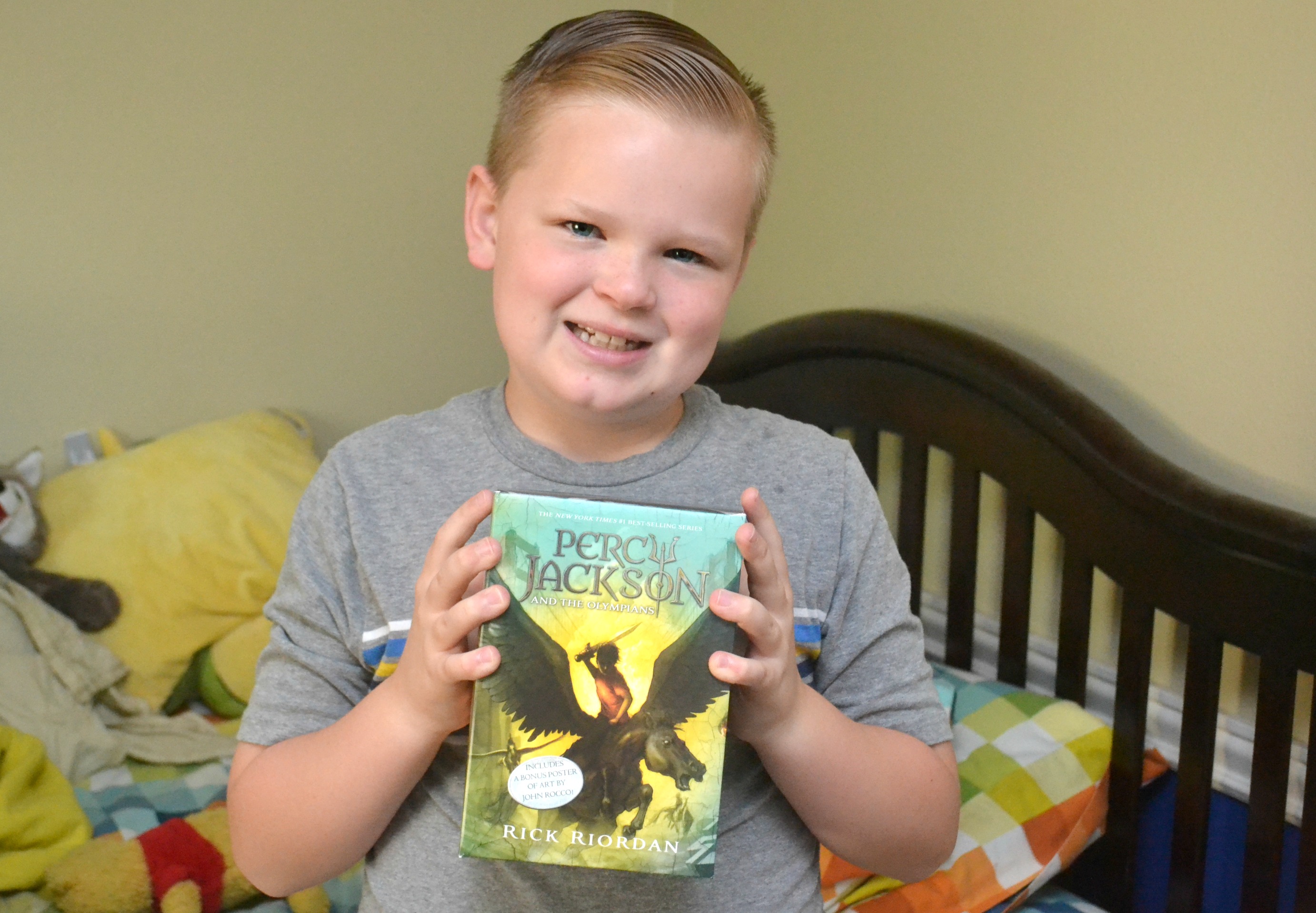 Book One – The Lightning Thief: Percy Jackson is a good kid, but he can’t seem to focus on his schoolwork or control his temper. And lately, being away at boarding school is only getting worse-Percy could have sworn his pre-algebra teacher turned into a monster and tried to kill him.

Book Two – The Sea of Monsters: After a summer spent trying to prevent a catastrophic war among the Greek gods, Percy Jackson finds his seventh-grade school year unnervingly quiet. His biggest problem is dealing with his new friend, Tyson—a six-foot-three, mentally challenged homeless kid who follows Percy everywhere, making it hard for Percy to have any “normal” friends. But things don’t stay quiet for long…

Book Three – The Titan’s Curse: When the goddess Artemis goes missing, she is believed to have been kidnapped. And now it’s up to Percy and his friends to find out what happened. Who is powerful enough to kidnap a goddess?

Book Four – The Battle of the Labyrinth:  Percy Jackson isn’t expecting freshman orientation to be any fun. But when a mysterious mortal acquaintance appears on campus, followed by demon cheerleaders, things quickly move from bad to diabolical. In this latest installment of the blockbuster series, time is running out as war between the Olympians and the evil Titan lord Kronos draws near.

Book Five – The Last Olympian:  All year the half-bloods have been preparing for battle against the Titans, knowing the odds of victory are grim. Kronos’s army is stronger than ever, and with every god and half-blood he recruits, the evil Titan’s power only grows. While the Olympians struggle to contain the rampaging monster Typhon, Kronos begins his advance on New York City, where Mount Olympus stands virtually unguarded. Now it’s up to Percy Jackson and an army of young demigods to stop the Lord of Time. 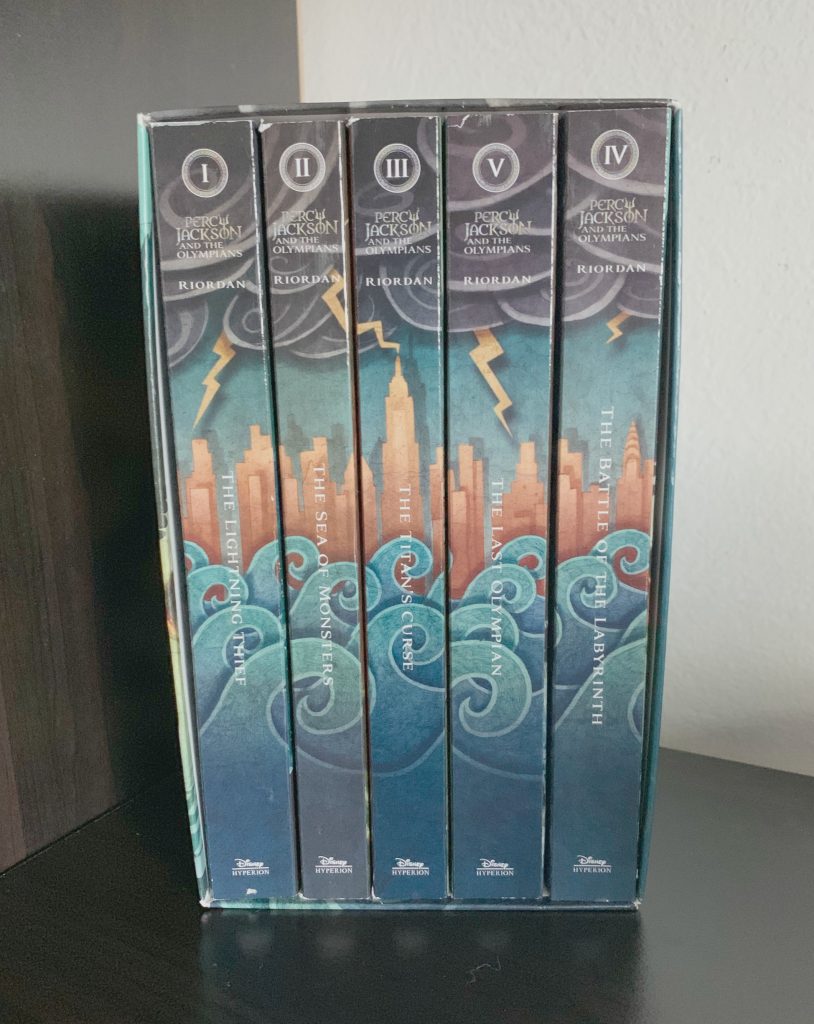 Percy Jackson is about to be kicked out of boarding school… again. And that’s the least of his troubles. Lately, mythological monsters and the gods of Mount Olympus seem to be walking straight out of the pages of Percy’s Greek mythology textbook and into his life. And worse, he’s angered a few of them. Zeus’s master lightning bolt has been stolen, and Percy is the prime suspect. Now Percy and his friends have just ten days to find and return Zeus’s stolen property and bring peace to a warring Mount Olympus. But to succeed on his quest, Percy will have to do more than catch the true thief: he must come to terms with the father who abandoned him; solve the riddle of the Oracle, which warns him of betrayal by a friend; and unravel a treachery more powerful than the gods themselves. 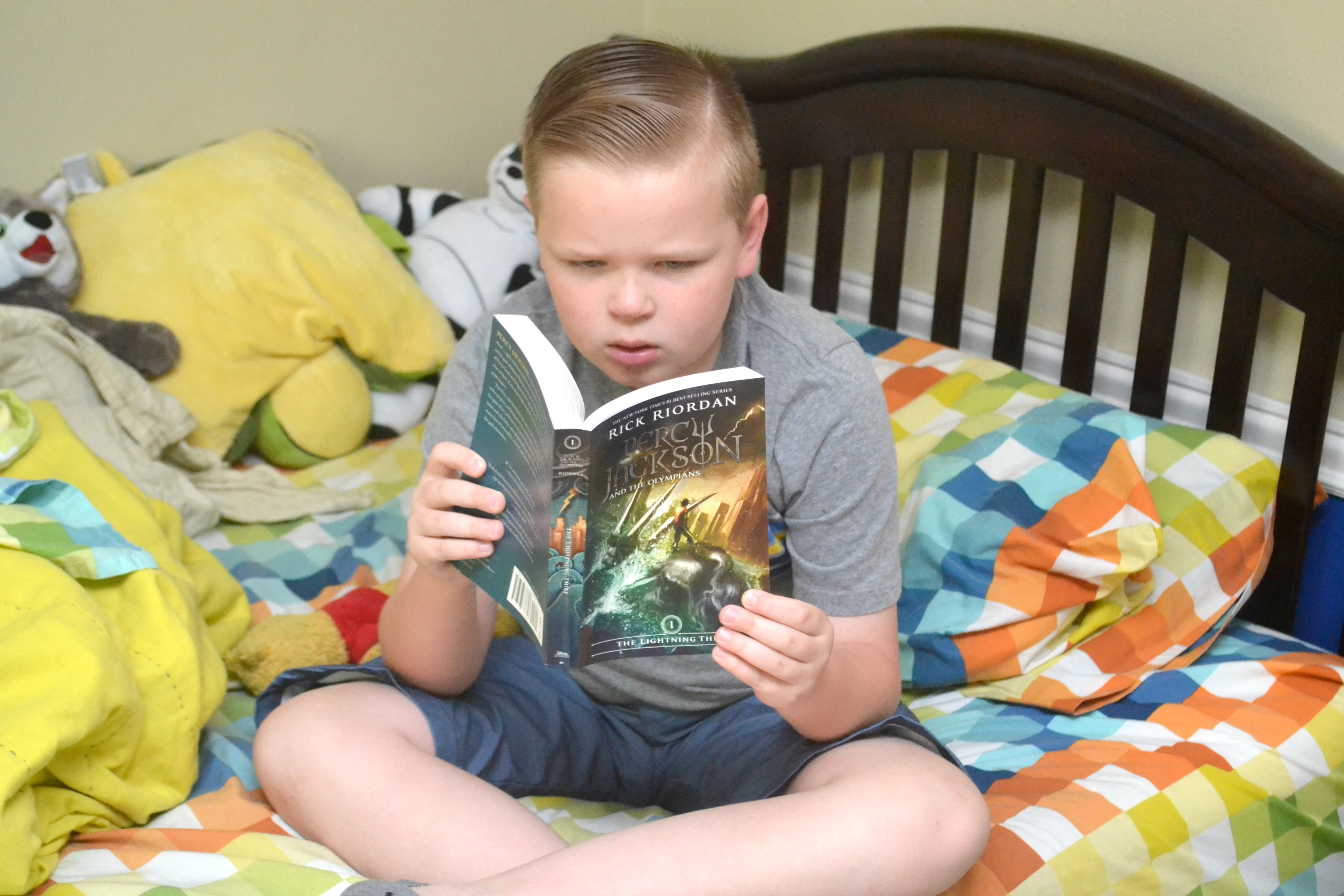 While you and your kids are counting down the days until summer break, I hope you also take a moment to think about how you will continue to have your kids have daily learning, reading and screen-free time this summer.  The summer slide is a real thing, and by simply adding 30 minutes of reading to your child’s day can help them keep those brains working!  Percy Jackson will keep your child entertained and turning pages in this fast paced book series. 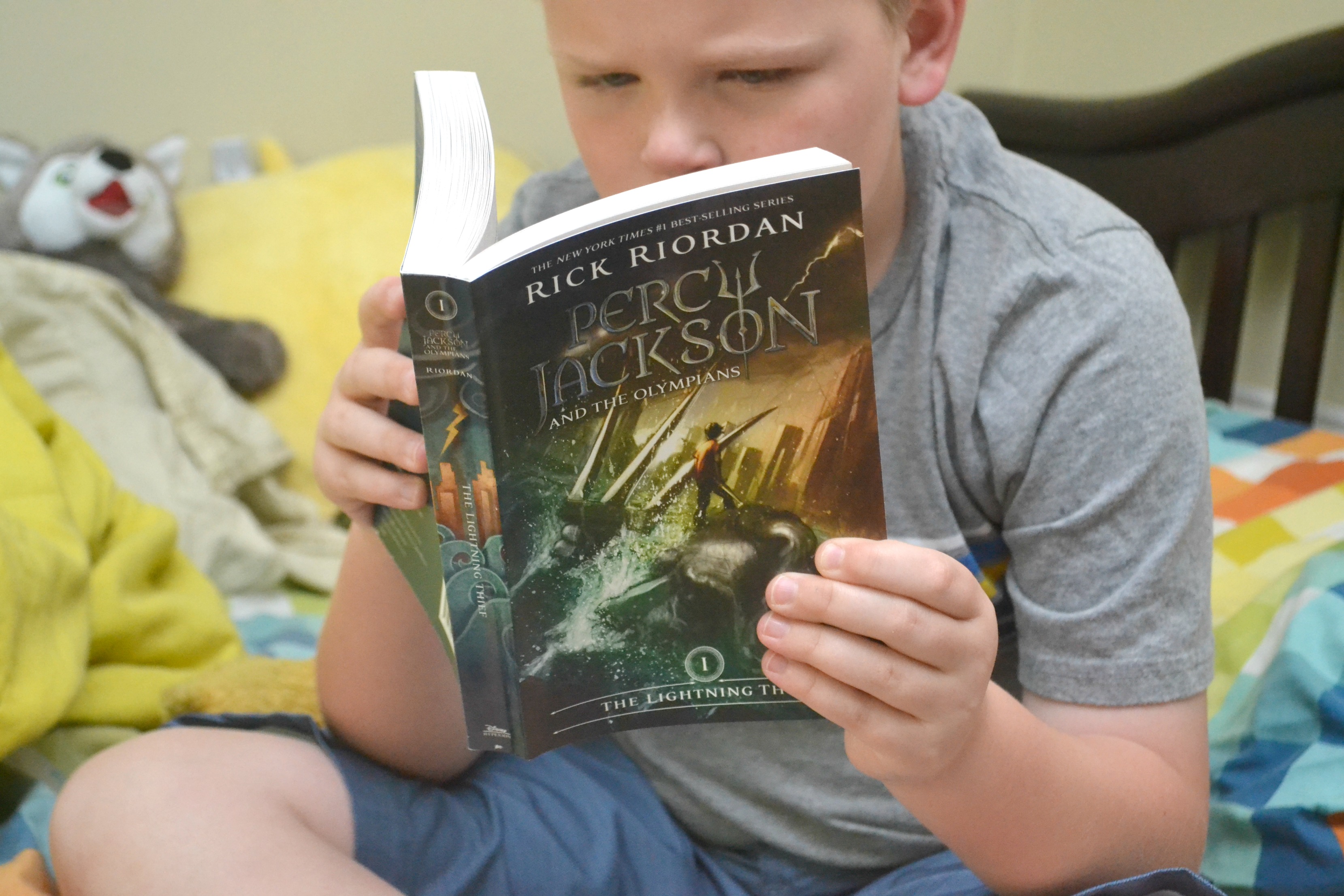 What book series have your kids been reading lately?