For all the latest updates straight to your inbox
Home » Blog » family » Let’s talk about Sex, yes sex!!
0 shares
Let’s talk about Sex, yes sex.
The last couple of days all I have seen on Facebook is the
uproar of a certain book that is apparently being used for sex education in
some public schools, I am not going to debate if said book is being used or
not, frankly it doesn’t matter to me because I do not live in Tennessee or have
a child in that school district.
However, after reading so many people’s reactions to the book –
specifically the pictures/illustrations I feel compelled to write what I am feeling
about the whole ordeal.  Yes, it is an
ordeal now.
First, some ground rules and disclosure on my part.  I will not tolerate any hateful comments to
myself or my readers so play nice.  I
support homeschooling, public schools and private schools – as long as your
child is being educated I could care less where or how.  I am a Christian; I live my life by
co-existing with every religion.  Do not
judge me for my ways and I will not judge you. 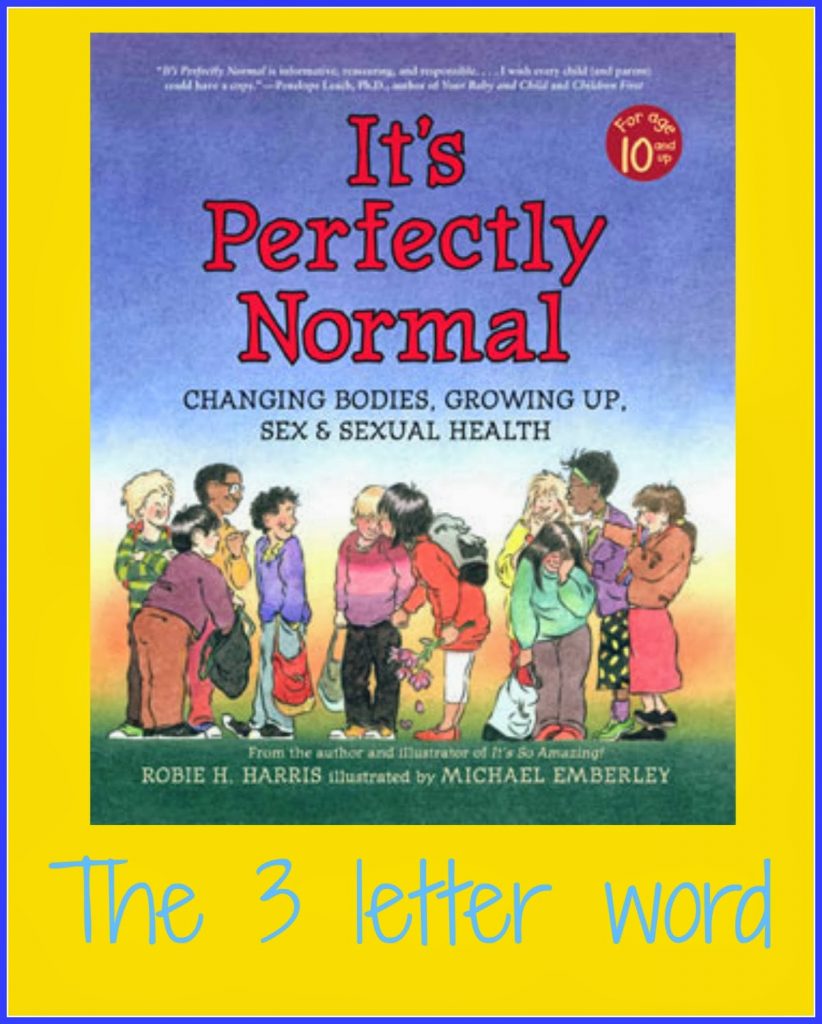 Okay, now for some good old Sex Ed talk.  The book in discussion is called “It’s
Perfectly Normal”.  This book is one of
the many sex education books for children.
The book preview shows some interesting and kind of laughable
illustrations of naked bodies and sexual organs.  Personally, this book looks super outdated
and funny to me, obviously isn’t a book I would choose to use for sex education
for my children.  Now, the biggest issue
that most people have with this book is the age it is apparently being used for
and that the public schools are “forcing” it on the students.  I am not sure I believe that but again, I am
not going to debate that issue.  I will
be honest; this book does seem a bit explicit for a 4th grader.
So my questions for you –
What is appropriate?
What age should we be looking at sex ed?
Who should be responsible for the teaching?
I saw so many upset parents commenting on this issue on Facebook
and twitter.  Some of the comments were
all about how horrible and pornographic the book was.   Some comments were about how the school shouldn’t
teach sex education.  Some comments were
simply saying they were happy they were homeschooling their children because of
this.  Some thought that this would
confuse a 10 year old.
Time to get honest; when I read these comments all I can
think about is me at 10 years old.  I
went to a private school and I knew exactly what masturbation was, I knew was
sex was and I certainly knew that having sex was something that could result in
have a baby.  Maybe I was the exception
but the reason I knew about the above was because my mom was very open and
honest with me.  So this drives me back
to what I worry about when reading these comments.
If the schools aren’t going to teach it, will
you?  Will you be able to be so open and
honest with your kids that the schools won’t have too?
Times are changing, my 3 year old boy just gave me a hug a
couple nights ago and rested his head on my chest like any normal 3 year old
and looked at me and asked “what are these?” as he pointed to my boobs.  I would be telling you a lie if I said I wasn’t
surprised at his question…I was surprised!
HA!  But that simple question got
me to thinking, how will Jeremy and I talk about bodies and sex to our
kids?  The sexual ideations come earlier
in life I believe. The age that children hit puberty is much younger than
before which also leads us to believe that the age that kids start exploring
their sexuality is younger as well.  Why
are we so focused on sex being such a taboo?
With that taboo around sex comes shame, embarrassment and hardships
later on in life.
So what is the answer?
Honesty is my answer.  Children
seem to grow up so much earlier than years ago.
As parents it is our responsibility to teach our children right and wrong
but do not damn them.  Do not punish them
for being explorers of their own bodies.
My belief is that schools absolutely should have a hand in teaching our
children about the science of sex and should also have literature and resources
available for the children to access if they want more information or help. For
those that decide to homeschool, I think those children should also have a curriculum
around sex education.
Look around at our youth, they are provocative and exploring
boundaries that some of us may not have explored until high school or
college.  Times have changed.  We cannot simply tell the schools to STOP, we
should be working together to assist our children into becoming the best they
can be.  Kids have sex, kids masturbate,
and kids have babies – fact.   Public School kids, Home Schooled kids and
Private school kids alike – no one type of schooling makes the idea of sex
disappear from a human’s brain.
Do not focus your energy on the literature that is being
used – instead focus on how we will as a community of parents and educators not
hide behind the obvious and the facts.
Sex Education is so important.  Now
if you school district is one of those that is being forced to use this book
mentioned….I am sorry that your kids have to look at such funny illustrations…do
your kids a favor and find a well written book and sit down with them and begin
an open conversation around sex.
How do you feel about this book being used? Any good Sex
Education books you would like to recommend? What tips do you have for other
parents?