Disclosure:  My family and I were provided with free screening tickets in exchange for this honest review.

If your kids are like Jude and Teagan they have been anxiously waiting for Ralph Breaks The Internet.  It is finally here!!  Last night we had the opportunity to go to a pre-screening of Ralph Breaks The Internet.  The kids were so excited, and honestly, I was too.  I loved Wreak It Ralph and always hoped a second movie would be released.  While I will not give the movie away I will say this, it is a MUST SEE!  Disney shouldn’t surprise me by now but honestly the attention to detail in this movie was pretty amazing.

In RALPH BREAKS THE INTERNET, video-game bad guy Ralph (voice of John C. Reilly) and best friend Vanellope von Schweetz (voice of Sarah Silverman) leave the comforts of Litwak’s arcade in an attempt to save her game, Sugar Rush. Their quest takes them to the vast, uncharted world of the internet where they rely on the citizens of the internet—the Netizens—to help navigate their way. Lending a virtual hand are Yesss (voice of Taraji P. Henson), the head algorithm and the heart and soul of the trend-making site “BuzzzTube,” and Shank (voice of Gal Gadot), a tough-as-nails driver from a gritty online auto-racing game called Slaughter Race, a place Vanellope wholeheartedly embraces—so much so that Ralph worries he may lose the only friend he’s ever had. 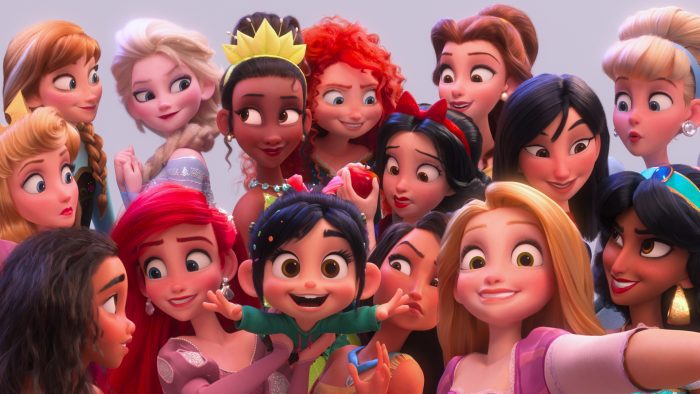 It was so much fun to see Ralph and Vanellope walk through the internet for the first time.  It was so bright and colorful and sucks them right in!  Sounds familiar right?  What was fun about this movie was that the kids had many laughs but some of the parts of the movie was obviously geared towards the adults in the room.  I have to say, I found myself laughing through out the whole movie.

There has been a lot of talk about the Princess scenes and hands down this was my favorite part.  The original voices, creative story weaving and silly puns about the princess life made me want to hang out with this group of princesses even longer!  So fun!

Ralph Breaks The Internet arrives in theaters everywhere on November 21st!  Get your tickets today!

Will you be heading to the theater this holiday weekend to check out Ralph Breaks The Internet?