It is crazy to think that summer break for Jude and Teagan is quickly coming to an end.  We have all had a very busy summer, but one thing we made sure to make time for every day was reading.  Not just for Jude and Teagan either, mom and dad had to join in this summer reading routine as well.  Honestly, it is the best parenting decision we have made in a long time!  All of us have read more in the last 6 weeks than we ever have. 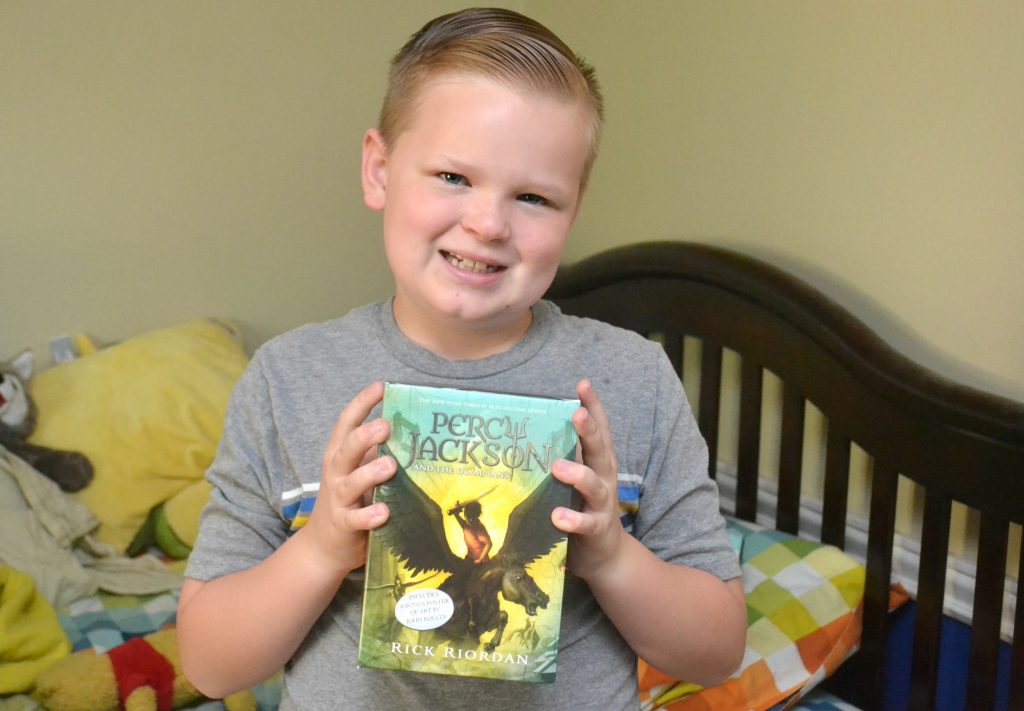 Finding a great book series for each of the kids to focus on this summer was important to us and back in May I shared the amazing Percy Jackson & the Olympians series written by Rick Riordan.  From the moment we introduced Jude to Percy Jackson he was hooked.  And what was incredible was that not only did he love reading these books but it also had him itching to know more about Greek mythology.

Jude has read all five of the books from this series but one of them has really stood out to him, and that was book number four: The Battle of the Labyrinth.  Since reading about the Labyrinth, he has been interested in creating his own Labyrinth and even visiting one.  I started doing some local searches to find one but then decided that we could also have a little fun with a craft. 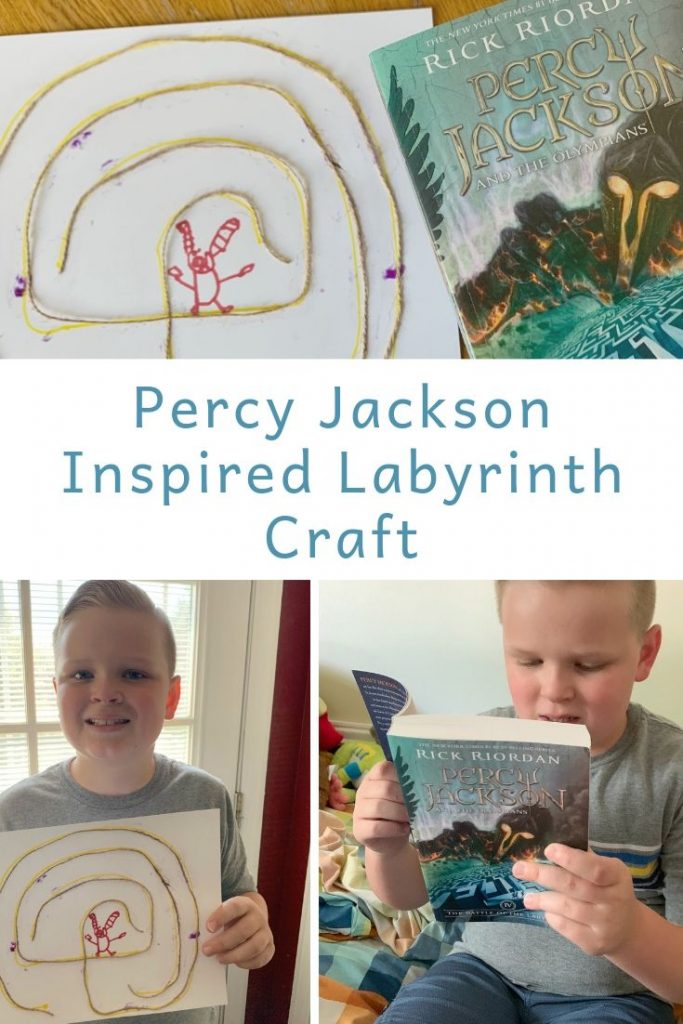 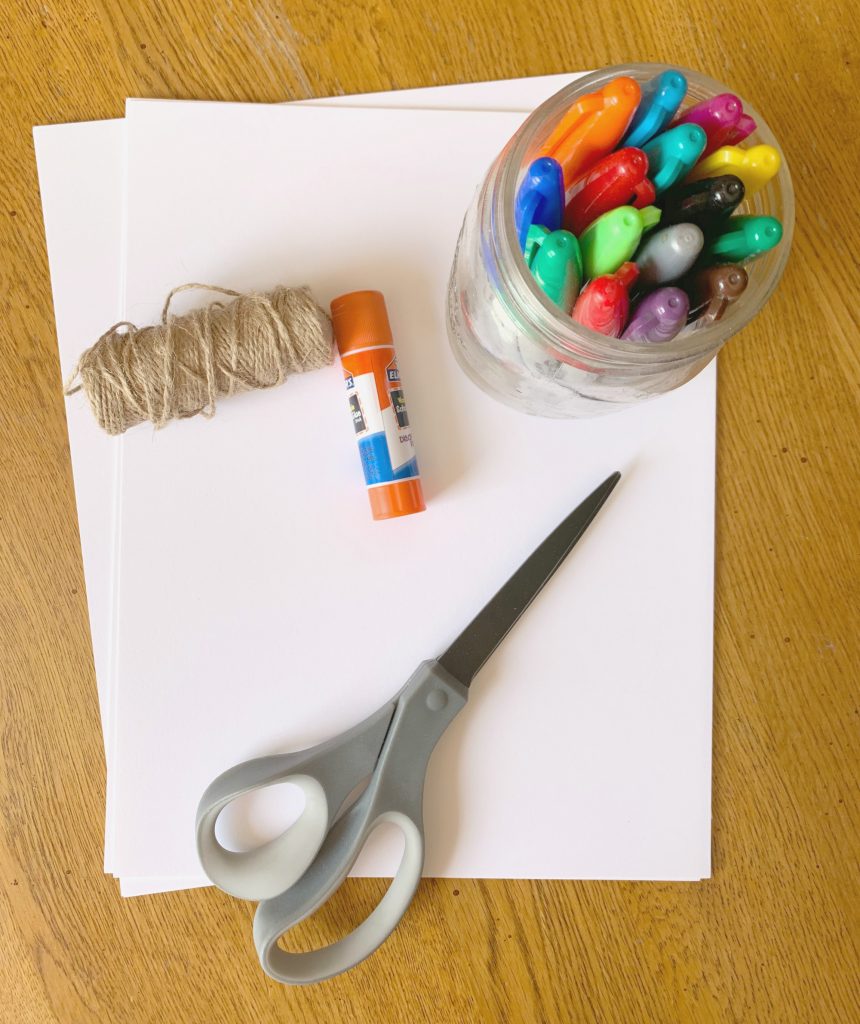 1. Using a piece of cardstock create your easy Labyrinth (see progress photos below for the one we used). 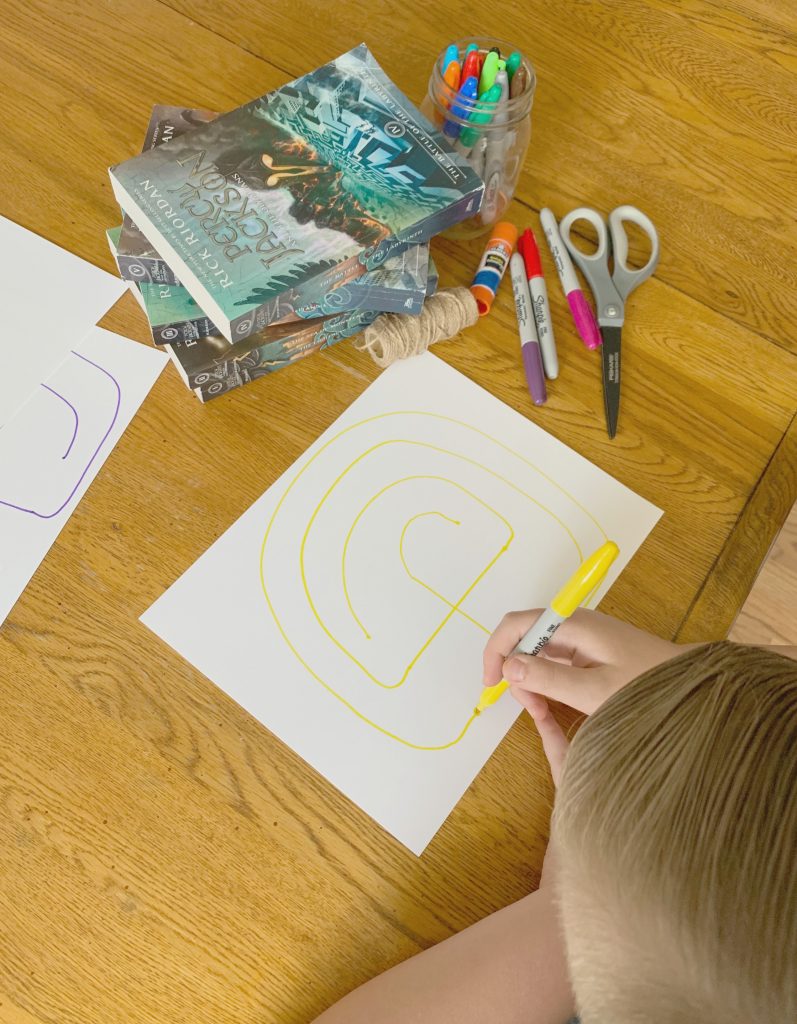 2. Once the Labyrinth is created, it is time to add your Minotaur to the center of the Labyrinth.  Jude loved this part and on each of his Labyrinths he made sure the Minotaurs looked a bit different. 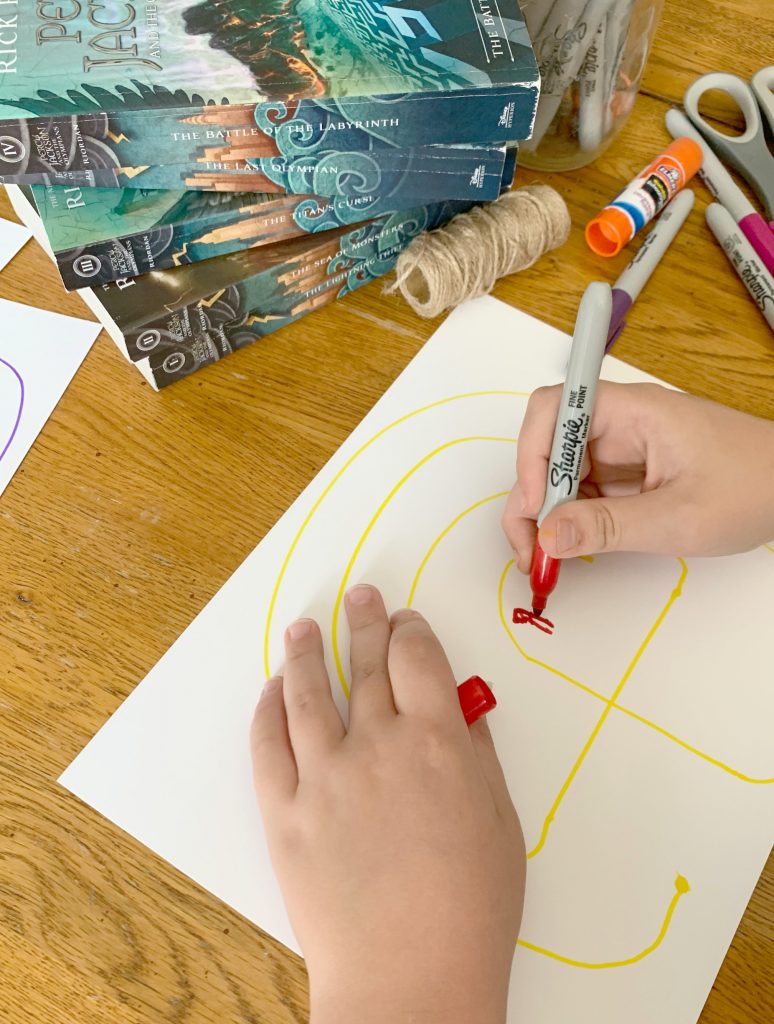 3. Using a glue stick or school glue, start placing the twine along the drawn out lines.  This can be tricky so we decided to do a few pieces at a time in order to no tangle up one super long piece of twine. 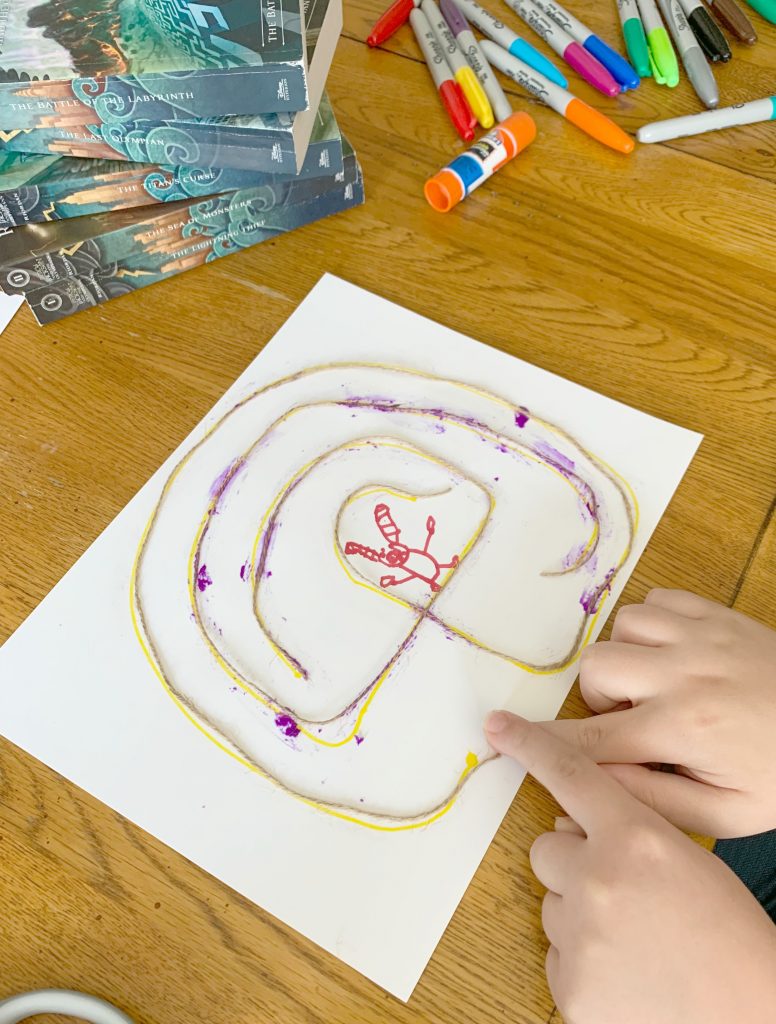 4. Let the glue dry.  Once dried, you can use your finger to guide you through the Labyrinth. 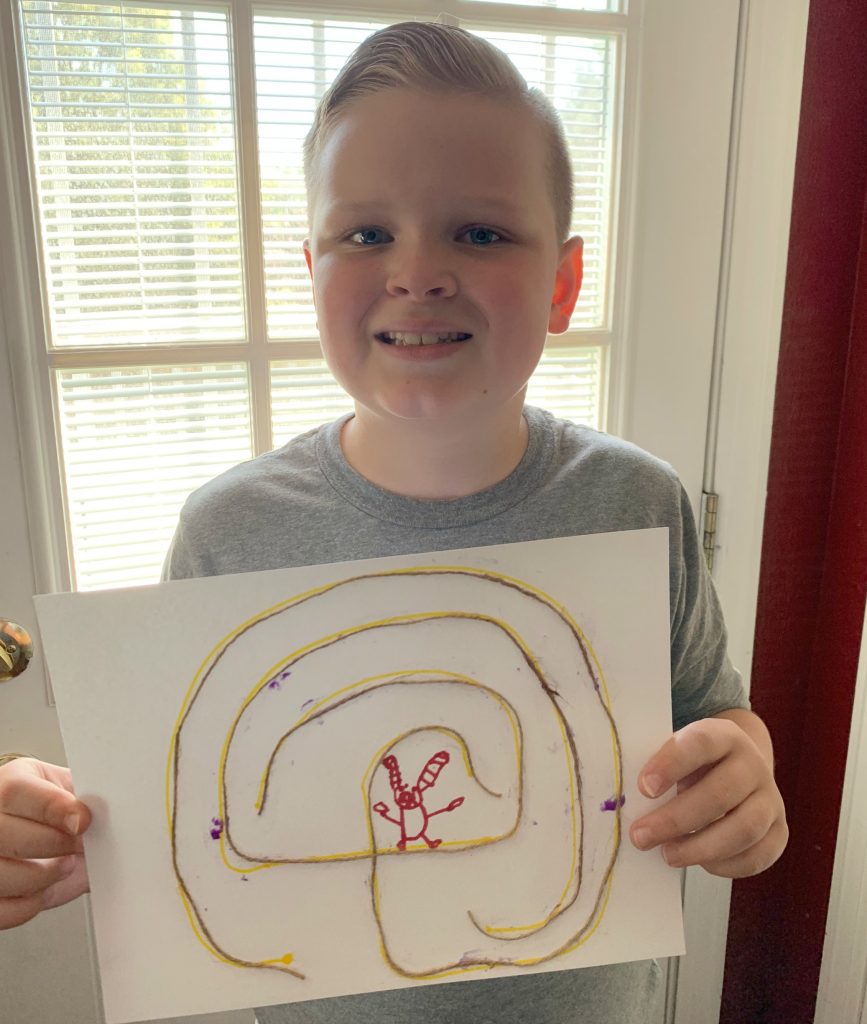 Jude had a lot of fun with this project because he is a puzzle lover.  We are going to try a few harder Labyrinth layouts soon too.  And now we are researching how to build a garden Labyrinth.  I love the idea of escaping into the Labyrinth to find some quiet time.  I think it could be perfect for Jude too!

By following the progress pictures below your child can create an easy Labyrinth in minutes.  Such a fun brain teaser too.  I loved seeing Jude’s brain work hard as I told him the steps. 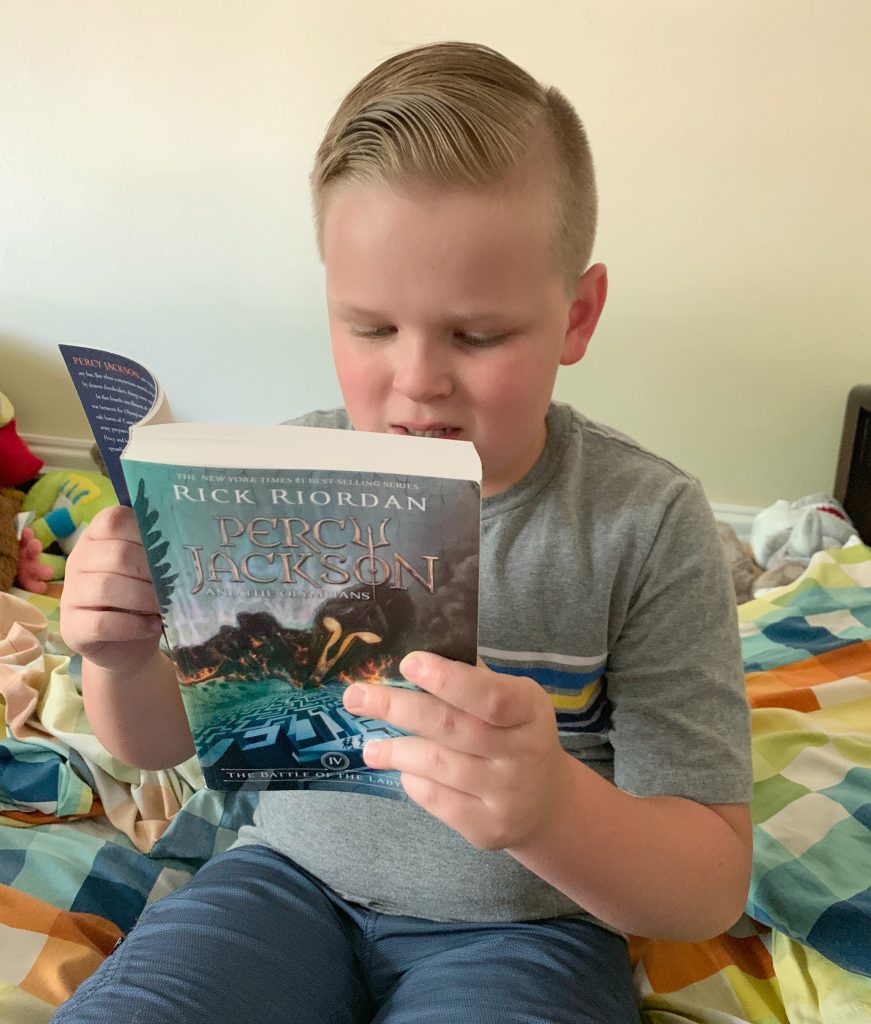 Book One – The Lightning Thief: Percy Jackson is a good kid, but he can’t seem to focus on his schoolwork or control his temper. And lately, being away at boarding school is only getting worse-Percy could have sworn his pre-algebra teacher turned into a monster and tried to kill him.

Book Two – The Sea of Monsters: After a summer spent trying to prevent a catastrophic war among the Greek gods, Percy Jackson finds his seventh-grade school year unnervingly quiet. His biggest problem is dealing with his new friend, Tyson—a six-foot-three, mentally challenged homeless kid who follows Percy everywhere, making it hard for Percy to have any “normal” friends. But things don’t stay quiet for long…

Book Three – The Titan’s Curse: When the goddess Artemis goes missing, she is believed to have been kidnapped. And now it’s up to Percy and his friends to find out what happened. Who is powerful enough to kidnap a goddess?

Book Four – The Battle of the Labyrinth: Percy Jackson isn’t expecting freshman orientation to be any fun. But when a mysterious mortal acquaintance appears on campus, followed by demon cheerleaders, things quickly move from bad to diabolical. In this latest installment of the blockbuster series, time is running out as war between the Olympians and the evil Titan lord Kronos draws near.

Book Five – The Last Olympian: All year the half-bloods have been preparing for battle against the Titans, knowing the odds of victory are grim. Kronos’s army is stronger than ever, and with every god and half-blood he recruits, the evil Titan’s power only grows. While the Olympians struggle to contain the rampaging monster Typhon, Kronos begins his advance on New York City, where Mount Olympus stands virtually unguarded. Now it’s up to Percy Jackson and an army of young demigods to stop the Lord of Time. 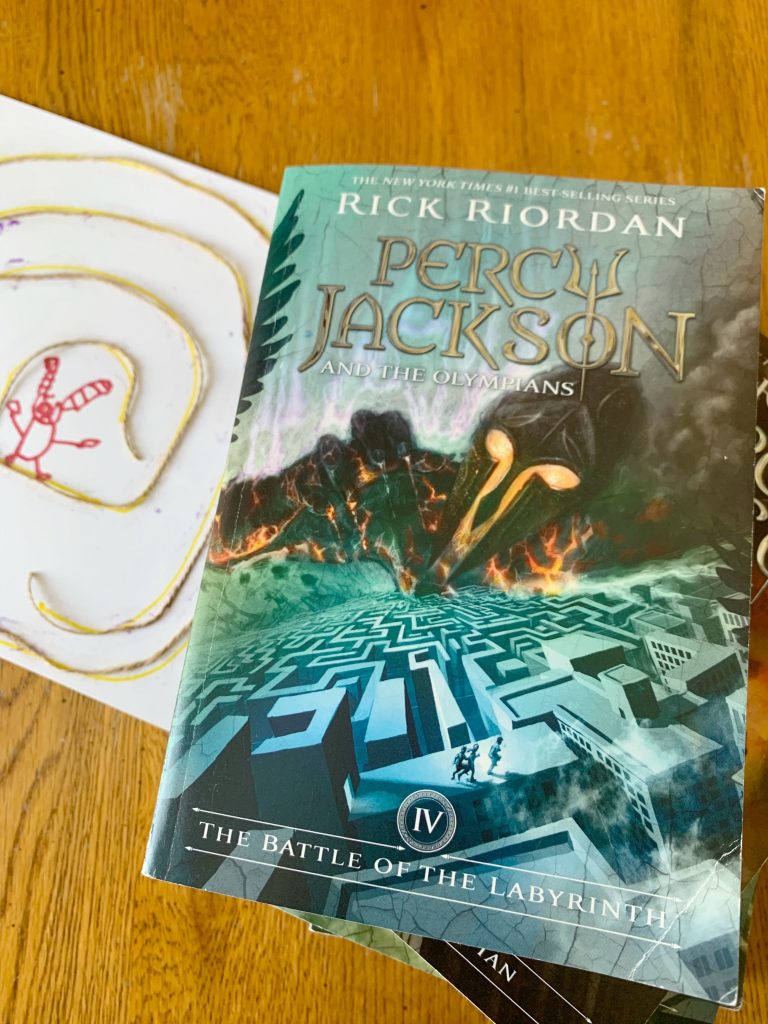 Make sure you check out our yummy Percy Jackson & the Olympians Candy Popcorn Treat we made this summer too.  It is super easy to make and is the perfect snack when you are reading all about Percy Jackson’s adventures.

Even though Jude has finished the Percy Jackson & The Olympians series, we are not done with our summer reading routine. In fact we recently picked up another one of Rick Riordan’s series called The Heros of Olympus, and Jude is diving in quick and loving it as well!  Oh the power of finding a good author and a good theme!  Keep those kids reading!!

HAVE YOUR KIDS DONE SOME READING THIS SUMMER?  WOULD LOVE TO HEAR WHAT BOOKS THEY ARE ENJOYING.