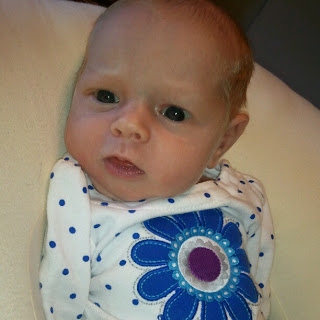 Teagan is just over 2 weeks now and I am ready to share my
breastfeeding experience for baby 2.0.
Let me begin with a statement that I am not bashing
breastfeeding or promoting formula feeding, I am simply sharing my experience
and my feelings.
Teagan’s breastfeeding story is WAY different than Jude’s…like
everyone says – every pregnancy/child is different!  SO TRUE!!
I shared Jude’s story on one of my favorite Formula Feeder’s website, you can
read it here for comparison.
Alright let’s start from the beginning.  I gave you my confession about my fears of
nursing Teagan months ago.  BUT I went into
the hospital with a clear and open mind to at least give Teagan as much as breast
milk possible.
She had other plans… Teagan did not want to latch from the very
beginning.  The moment after she was born
we did skin to skin and cuddled.  About
15 minutes later we tried nursing.  To my
surprise my anxiety did not go crazy, instead my memory worked in my benefit
and I was able to get her on.  The
problem you ask?  Her latch!  OMG!
OUCH!
The day went on and I kept at it.  I had nurses checking in on me and I kept
telling them that it HURT and hurt bad.
Their responses…“she will get the hang of it, you will get used to it,
it will be easier once your milk comes in”.
So I continued.  Day 2 was
worse.  I knew I was getting raw and
frustrated.  But I still did it…slowly my
anxiety was getting worse but the anxiety about asking for formula was much
worse!  So I just kept doing it.  It was so painful.  And she seemed overly hungry.  I wasn’t ready to give up yet. I didn’t want
to fail AGAIN!  Dammit why does it have
to be a FAIL when you can’t nurse?!?!
We were discharged from the hospital and once we were home I
still kept at it.  I nursed her and tried
hard to get her on correctly and get through the pain.  By 2am the next morning I was at my wits
end.  She was cluster feeding on and off
and I was in pain.  We had a sample of
formula so we used that.
Our nurse came over that morning and we discussed options and what I was
feeling.  I told her I wasn’t sure I
could do this anymore.  I didn’t want to
end up like a nutball like I was with Jude and I was not happy with how I was feeling
about feeding my baby girl.  🙁  I dreaded the cries of her being hungry
because I knew it was going to hurt.  Emotions
were high and I decided that for my mental health I needed to stop.
Then I bleed…I have decided I officially have some PTSD from
what happened next.  My NP told me to
pump if I decided I was doing breastfeeding just to make sure I didn’t get
infections.  So I sat down to pump that
evening.  Not paying attention, just
watching a movie with the hubs, I looked down after I had been pumping for 5
minutes and boom.  I saw blood…lots of
blood.  All over breast shield, in the
bottles, and all over my boobs.  It was a
horrible and scary sight.  I never bleed
with Jude.  I stopped the pump and dumped
the pink milk.  I cleaned my pump and
packed it up.  Done.  I reached my limit and knew that I had made
the right decision.
Here we are today, feeding my beautiful daughter formula and
she is thriving and happy and so am I.
This experience was so different than it was with Jude.  The pain was real…not just emotional this
time.  I am happy with my decision yet so
frustrated with the nurses in the hospital.
I continually told them that when I nursed it was so painful.  I feel like they weren’t listening to me…after
I was bleeding it was pretty obvious that something was REALLY wrong with the
latch and the prolonged nursing made it worse and painful. 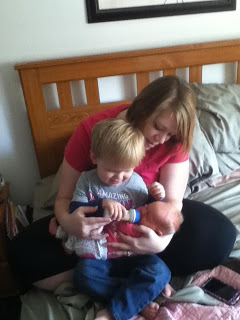 So what have I learned?
Advocate for yourself.  Make sure
you speak up for what you want and need.
So if there is a Baby 3.0 in our future I know I have to walk in with my
head high and my boobs covered.
I am a
Fearless Formula Feeder and proud of it!