For all the latest updates straight to your inbox
Home » Blog » Uncategorized » Potty Trained Finally?
0 shares
Potty Training is coming to an end…YAY!!  I honestly didn’t know when I would be able
to write this…and I hope that me writing this isn’t going to make me a
liar!
Yes, you have seen this picture before…a couple of times actually!  So it has been a long
road for Jude and the potty but we have come to the end. 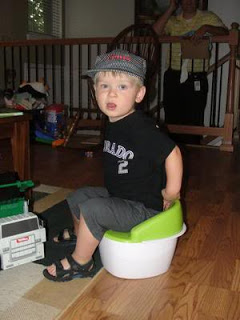 We didn’t have a trick or a big plan when we officially
jumped on the Potty Train in March but our constant reminders and skittles
seemed to do the trick.
Early March is when we first started the training.

Our goal was to be completely trained by August
so that we didn’t have to worry about Jude having accidents at school.  We almost made it.  Jude has had one POOP accident at school but
other than that he is doing really well.

He is able to unbutton his pants and pull them
down along with his pull up.  He can pull
them all back up too!  Just cannot button
his pants, but that is okay.  He is
really becoming independent in the bathroom too.  He wants to do it all on his own.  The only thing I still want to “double check”
is when he poops and tries to wipe…he has the concept down but his little bum
gets so sore and raw if he doesn’t get it completely clean.
Most of the time we still give him reminders of
going potty but when he is at school he is all on his own and is doing
well.
We are going to start letting him wear big boy
undies on non-school days but continue the pull ups for school just in
case.  So exciting!!!
Our Tricks:

We NEVER pressured him into using the potty.
It was all Jude led!
We used Skittles (his favorite candy) as treats.
*1
Skittle = went potty
*2
Skittles = told us he had to go potty and goes.
*3
Skittles = POOP!

We used Pull-Ups.
Never made him feel bad for having an accident.
Read lots of Potty Books while on the potty!

While I am so happy that we are done with
diapers for Jude, I am nervous about the frantic runs to the bathrooms in
public – you know it happens to everyone!!
Maybe by Christmas we will have a fully trained
little man…even at school!!
Oh, and I do believe that since Jude was hard
to train that Teagan will be easy on us….RIGHT?!?!