For all the latest updates straight to your inbox
Home » Blog » Uncategorized » Elf on the Shelf Fun – With 2 Elves
1417 shares
Hard to believe that our Elves have been with
us for a week now.   I know that a lot of
people think these little characters are creepy but I am not one of those
people.  Frankly, I love it!  I sit here wondering what creative ideas I
can come up with and I adore the smiles and laughs that we get to hear every
morning when Jude and Teagan find their Elves.
Before I go much further I need to introduce
our elves.  Peppermint came back this
year with a new friend for Teagan.  Our
little girl Elf needed a name and with the help of Jude – Teagan decided her
Elf would be called Cupcake!  So now we
have the challenge and fun of incorporating both Cupcake and Peppermint in our
Elf on the Shelf fun!  I will be honest –
some nights I go for something super easy because my creative brain is gone for
the day but on most evenings I go to bed anxiously waiting for morning just for
the Elf fun!!
So here is our first week of Elf on the Shelf
fun!  I hope that you are having a great
time with your Elf as well!  Tis the
season!! 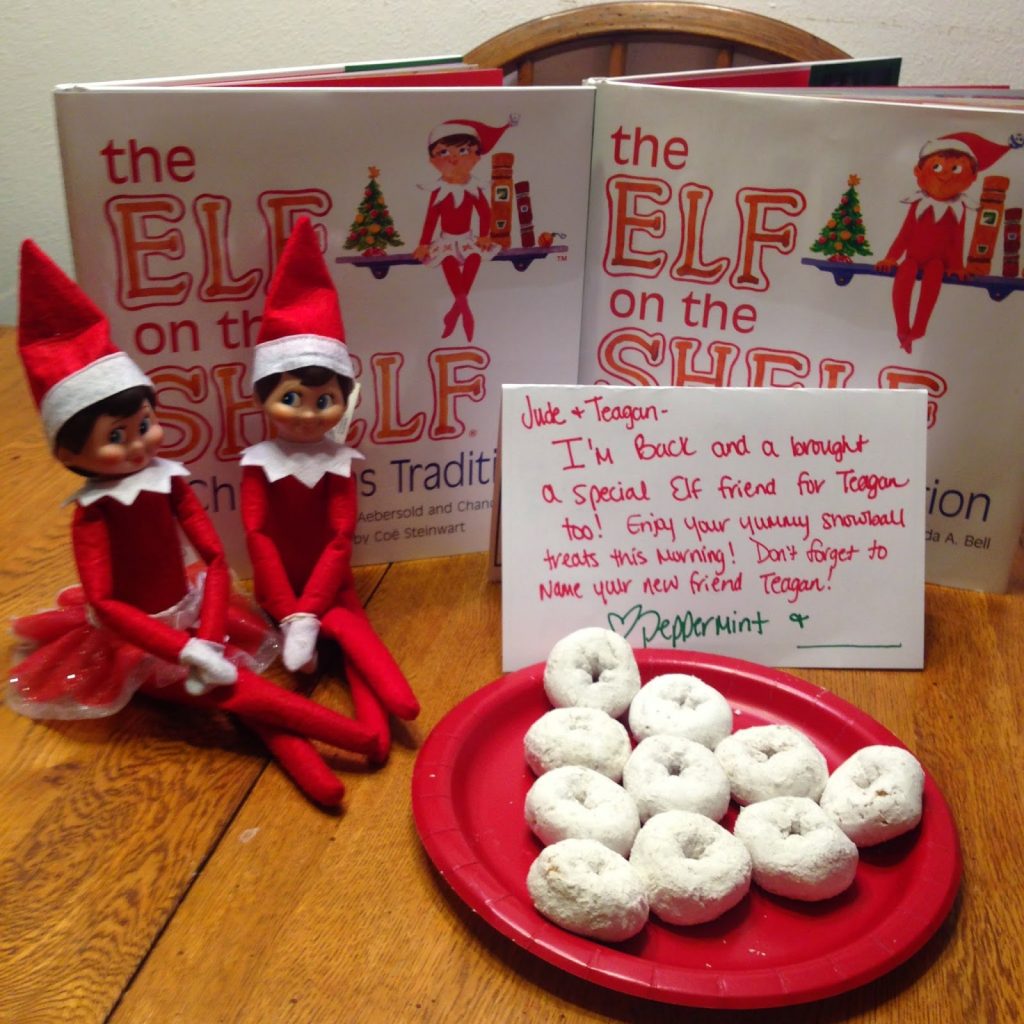 Night one – We had the Elf on the Shelf begin
on the day after Thanksgiving.  Kind of a
kick off to the Christmas season.  So
Jude and Teagan woke up on Friday to a surprise from Peppermint.  He brought snowballs for breakfast AND a new
friend for Teagan.  We sat down to eat
breakfast, thanks to Peppermint, and read the book as a family.  Once breakfast was finished and the book was
read we asked Teagan to name her elf – that was a challenge – but with the help
of Jude she came up with Cupcake!
HA!  Cupcake happens to be Teagan’s
nickname too!  Cute though! 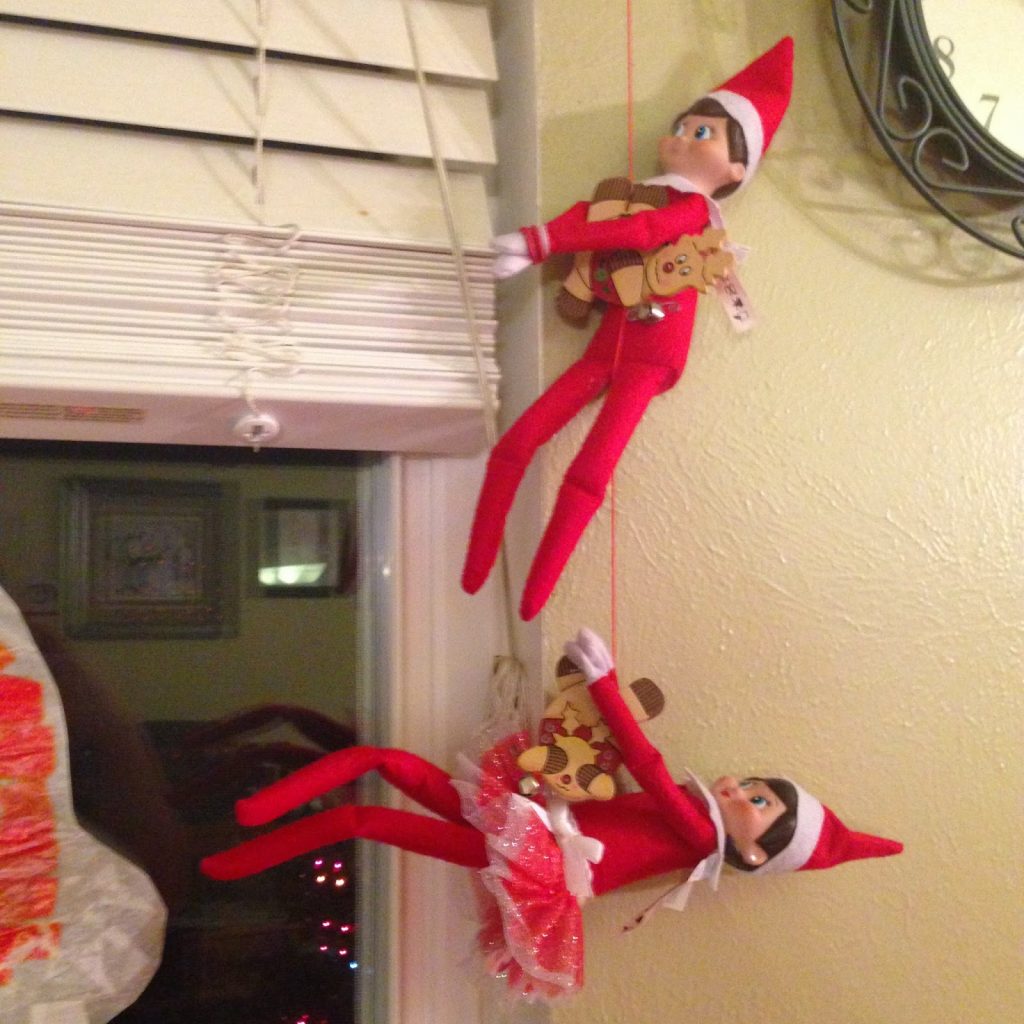 Night Two – Peppermint and Cupcake found some energy and decided to get the Christmas tree up and lit!  I wish I had their energy.  So the kids woke up to our tree ready for ornaments and they even brought new ornaments for Jude and Teagan.  Jude’s is a Storm Trooper and Teagan’s is Tinkerbell.  They were thrilled and we spent our Saturday morning decorating our tree and house for Christmas!  Thanks Elves!! 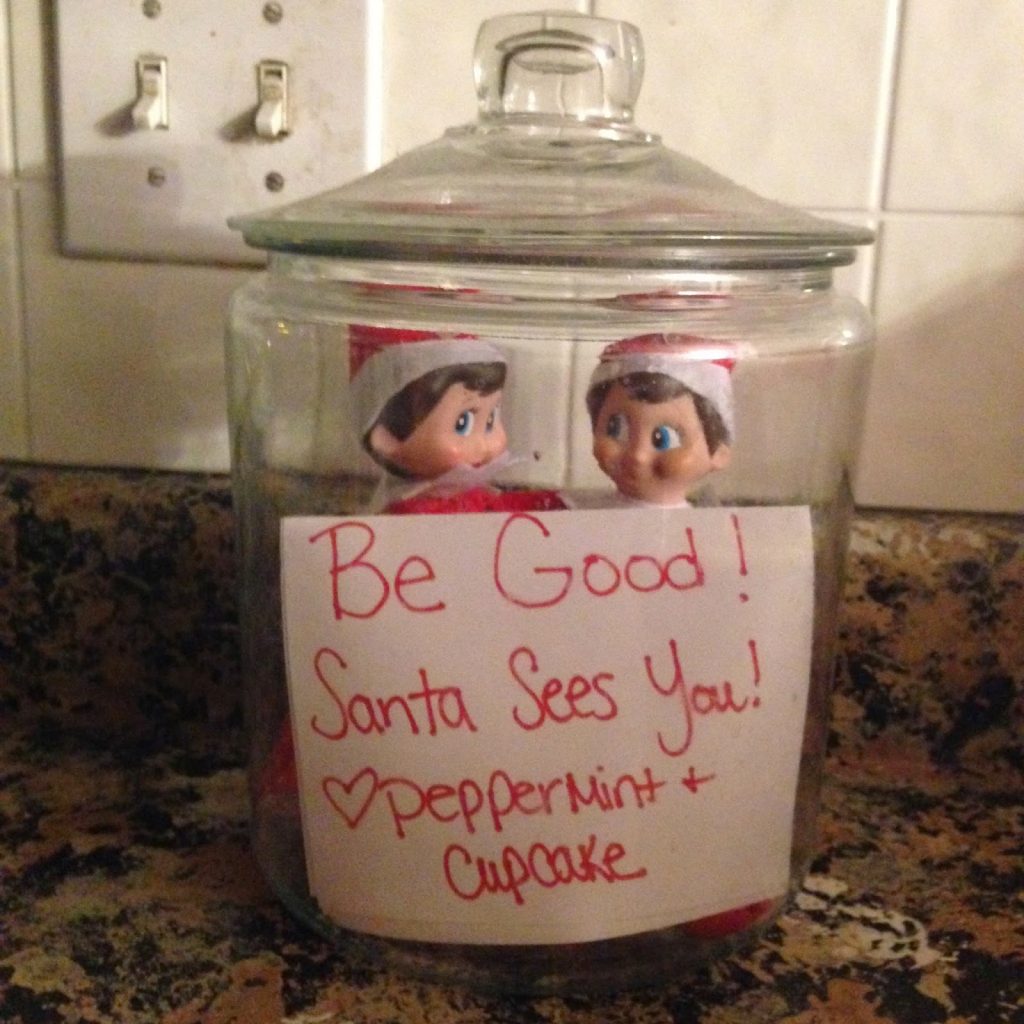 Night Three – Well Saturday was a bit of a taxing day on the kids so the behavior was questionable.  The Elves decided to leave a note about their behavior but they got stuck in the cookie jar!!  Oh No!  Teagan thought this one was funny. 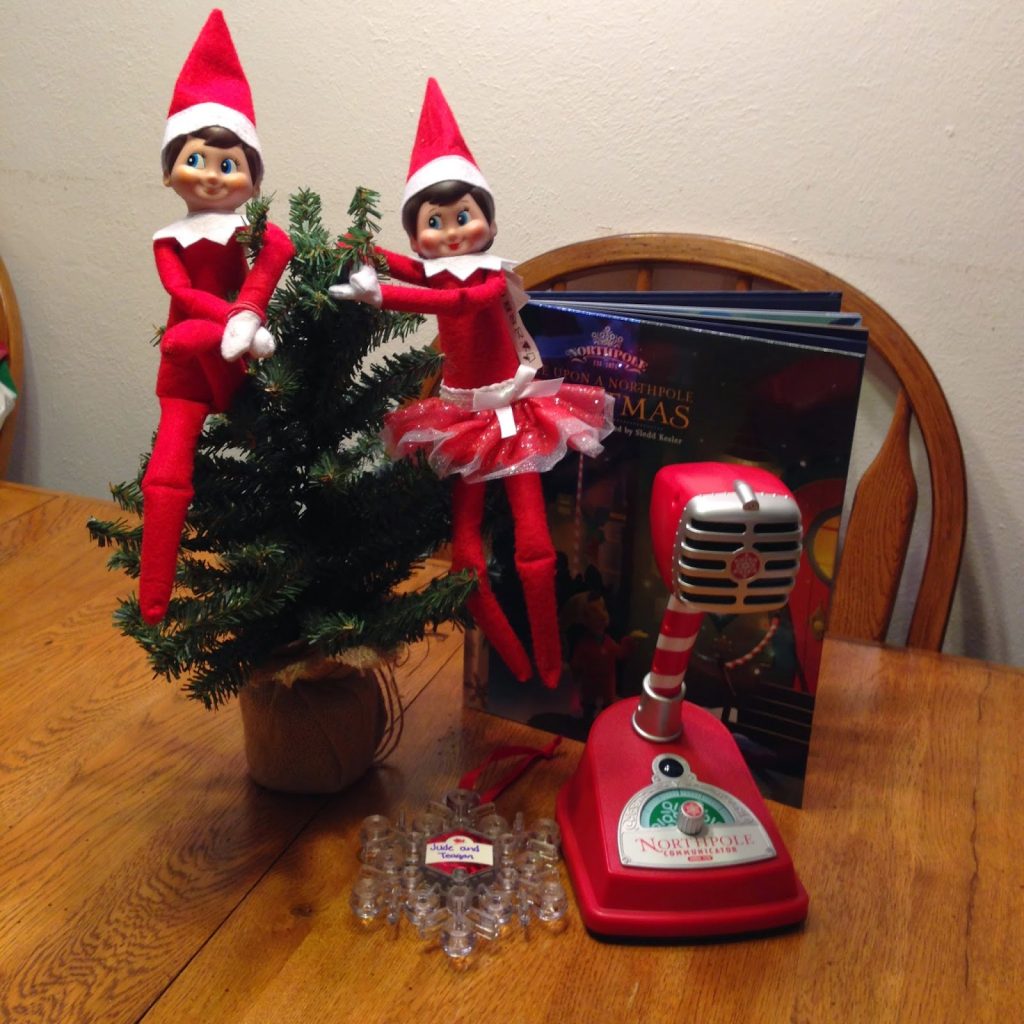 Night Four – Peppermint and Cupcake brought some treats for the kids.  Have you seen the Hallmark North Pole line of Christmas merchandise?  It’s a must have for this year.  Get on that!  The Elves brought a North Pole Communicator, Snowflake Beacon and a new book!  The kids will get to talk to the North Pole every night!  So cool!! 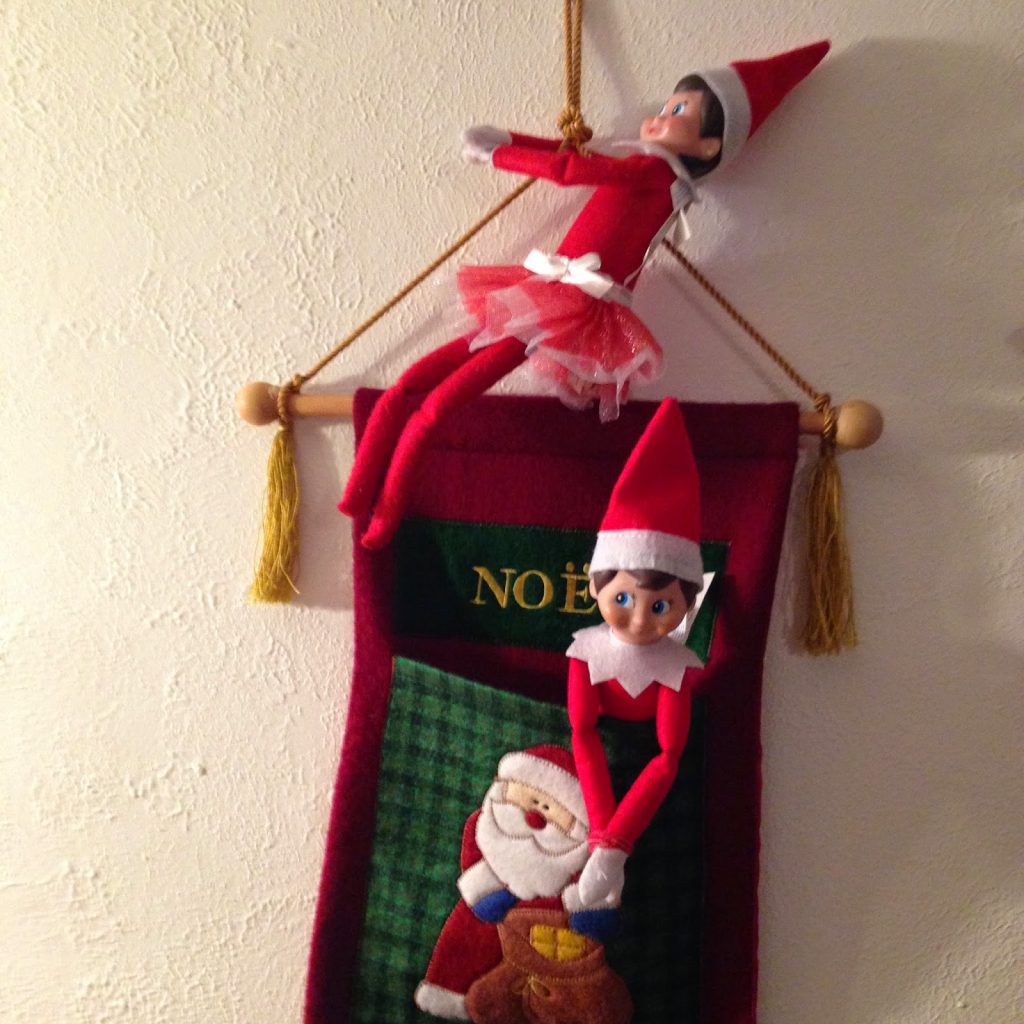 Night Five – Told ya – sometimes I have to creativity!  So the Elves decided to hang around on one of our decorations in the living room.  Easy but fun – it took the kids awhile to find their Elves that morning! 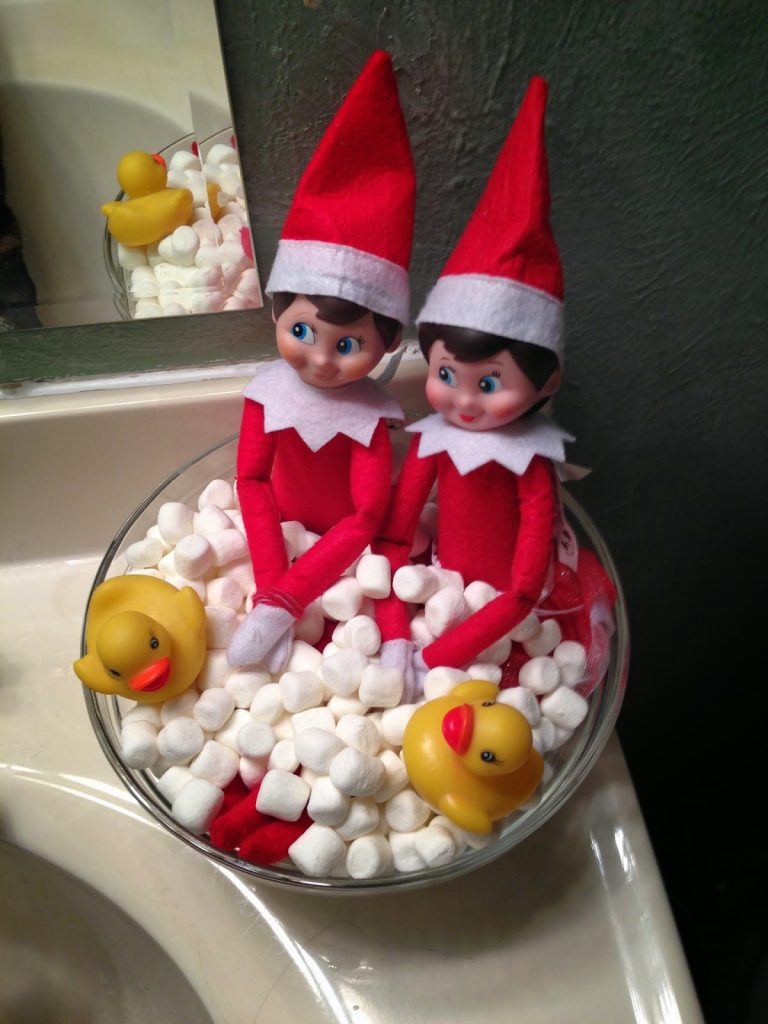 Night Six – Marshmallow Bubble Bath!!  This is one of my favorite ones.  I think it is the cutest thing.  Peppermint and Cupcake are soaking in the tub with their rubber duck friends.  Jude and Teagan thought it was a pretty funny thing to have the Elves taking a bath.  Lots of smiles with this one!
Well that is our first week – I hope that these ideas can give you some help through out the next couple of weeks!  Enjoy!! 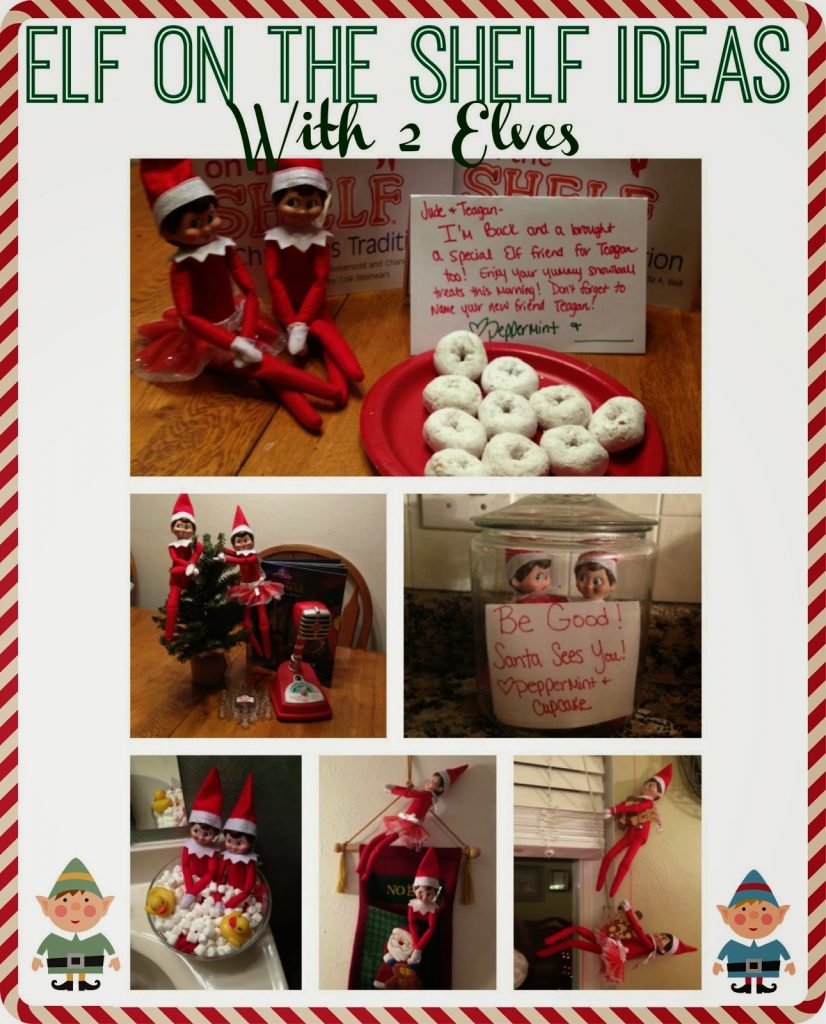