Disclosure:  We received tickets to the The Harlem Globetrotters event in exchange for our honest review.  All opinions are my own. 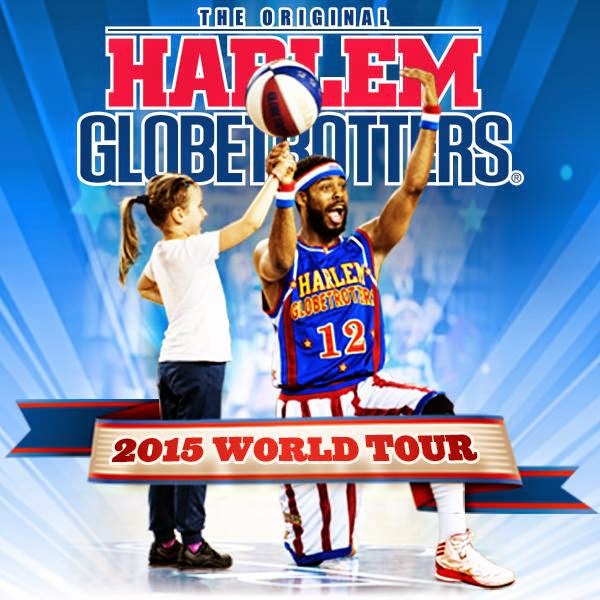 Last weekend we had a fun family night out to see The Original Harlem Globetrotters.  We were lucky enough to snag tickets at one of the smaller venues here in Denver which meant we felt up close and personal for the whole event.  Confession – this was the first time I had been to a Harlem Globetrotter game so I really had no idea what to expect but thankfully Jeremy had been a couple of times growing up.
Currently, the Globetrotters are on their 2015 World Tour – they are super busy and I am sure they have or will be stopping in your neck of the words so you best be checking out those tickets.  I knew that the kids would have fun but honestly didn’t expect to see them get so into the game.  It was a lot of fun to see them laughing and dancing. 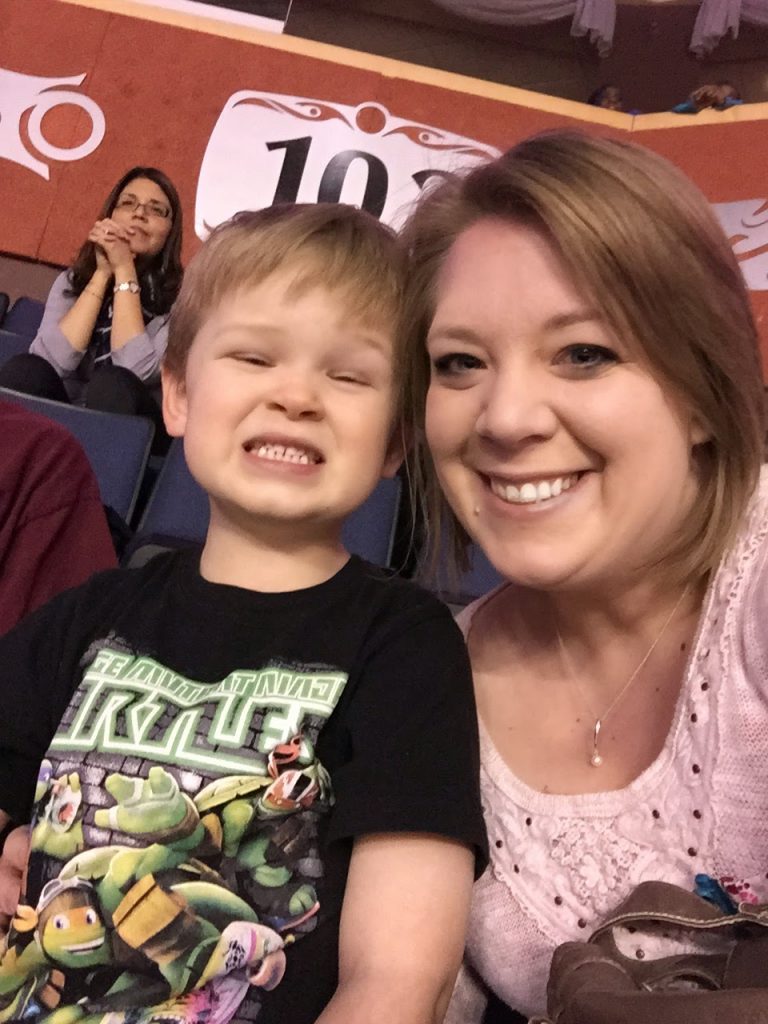 Jude and Mommy ready for the game to start.  He was loving all of dancing and skits that were going on before the game actually started. 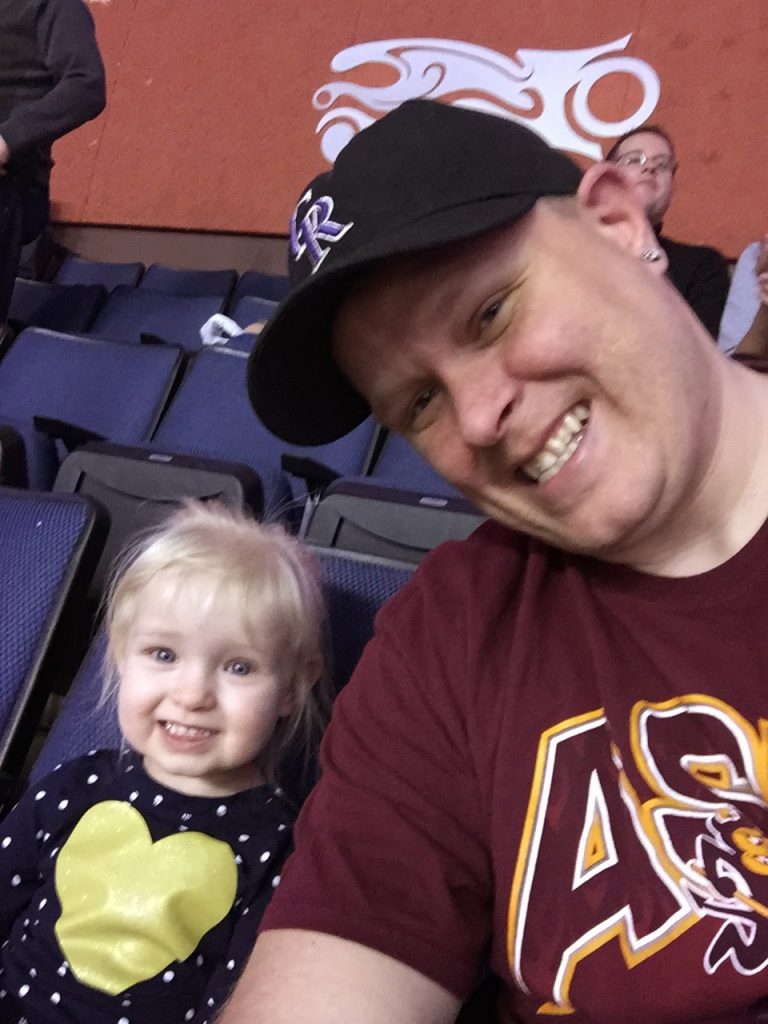 When Teagan wasn’t dancing she was sitting in her chair like a big girl just watching and taking in the whole game.  It was so cute.

Talented players!  Jude thought it was so cool that there was a lady doing tricks too!  Yes!  Go girl!!  Show them boys how to do it! 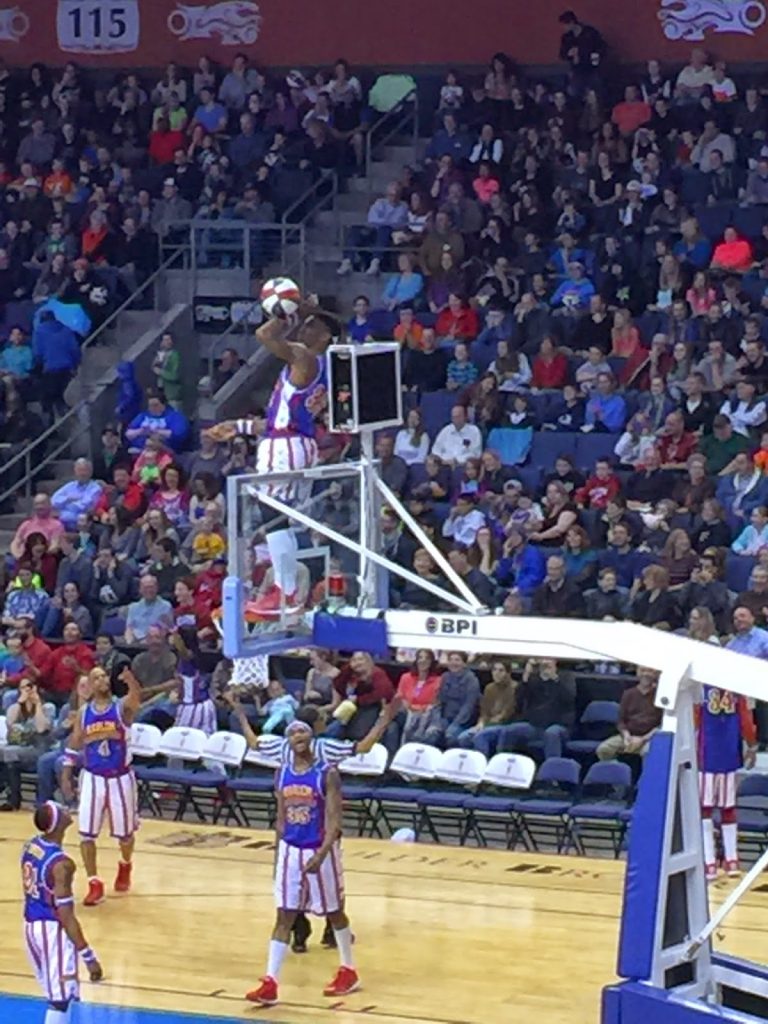 I think this was the skit that has stuck with the kids the longest.  Teagan seemed a little worried that he was going to fall but Jude thought it was hilarious that he was standing on the hoop! 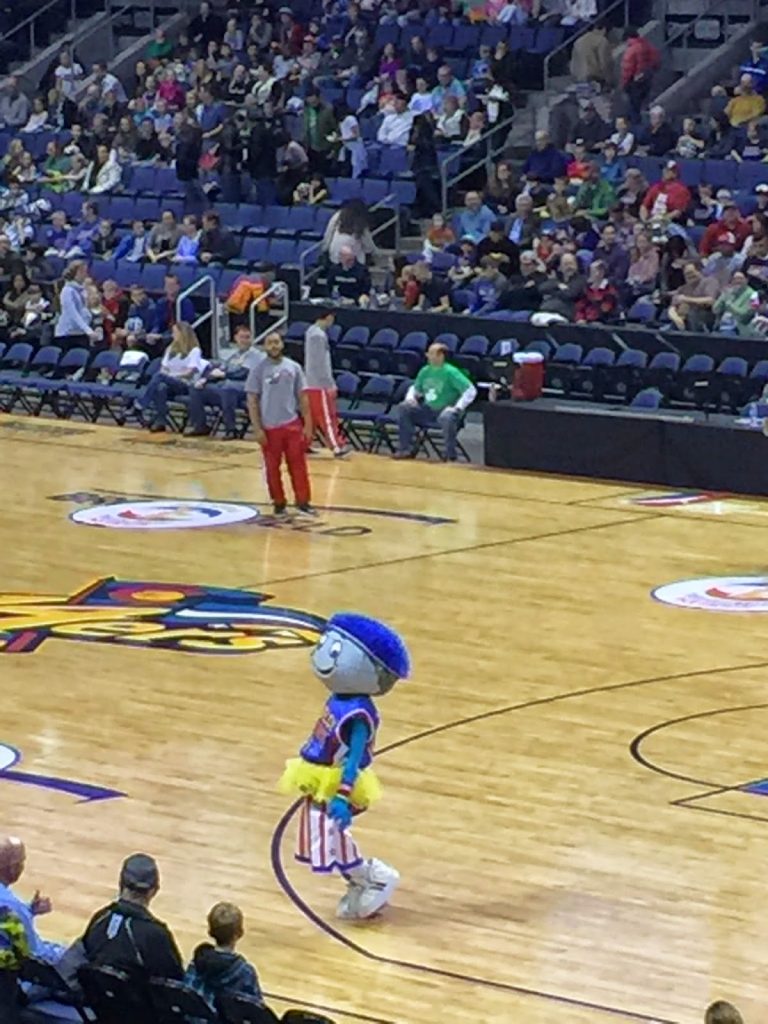 Okay, Globie was so fun.  And Teagan loved that he wore a tutu like a princess!  HA!!! 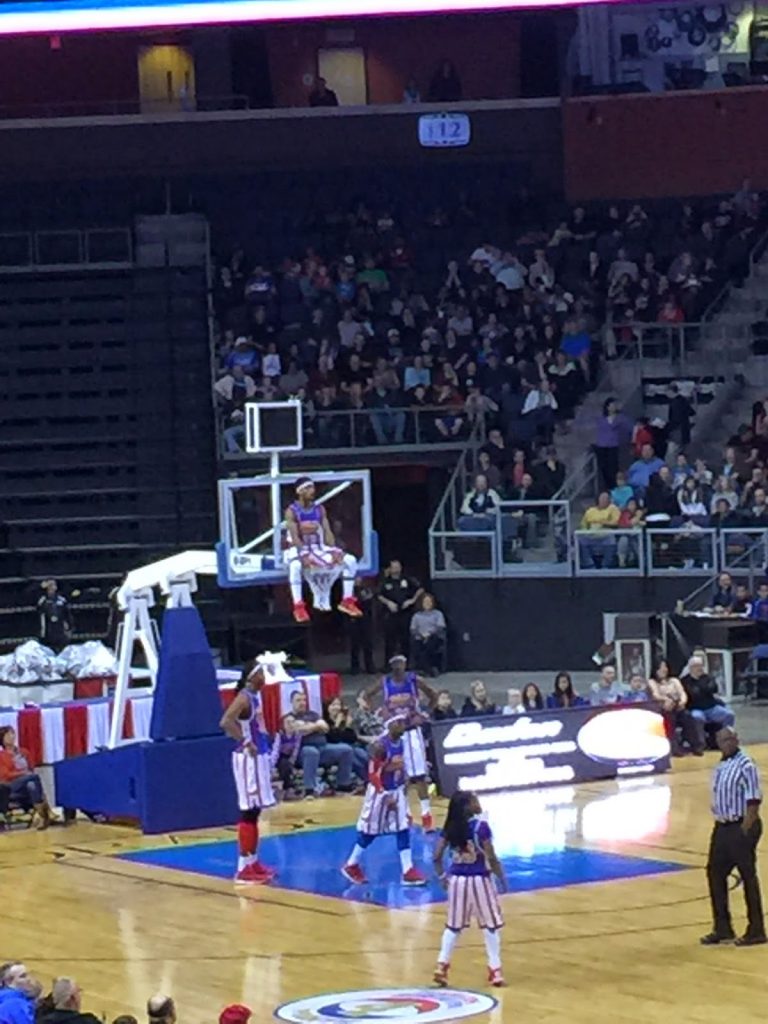 I was a little worried that the kids wouldn’t get all of the skits but they really got into the game.  As the Washington Generals kept scoring and leading the game they were really worried.  The skit was all about the ref being an old Generals player so he got kicked out of the game.  Jude will tell you that he actually got arrested…the mind of a 4 year old! 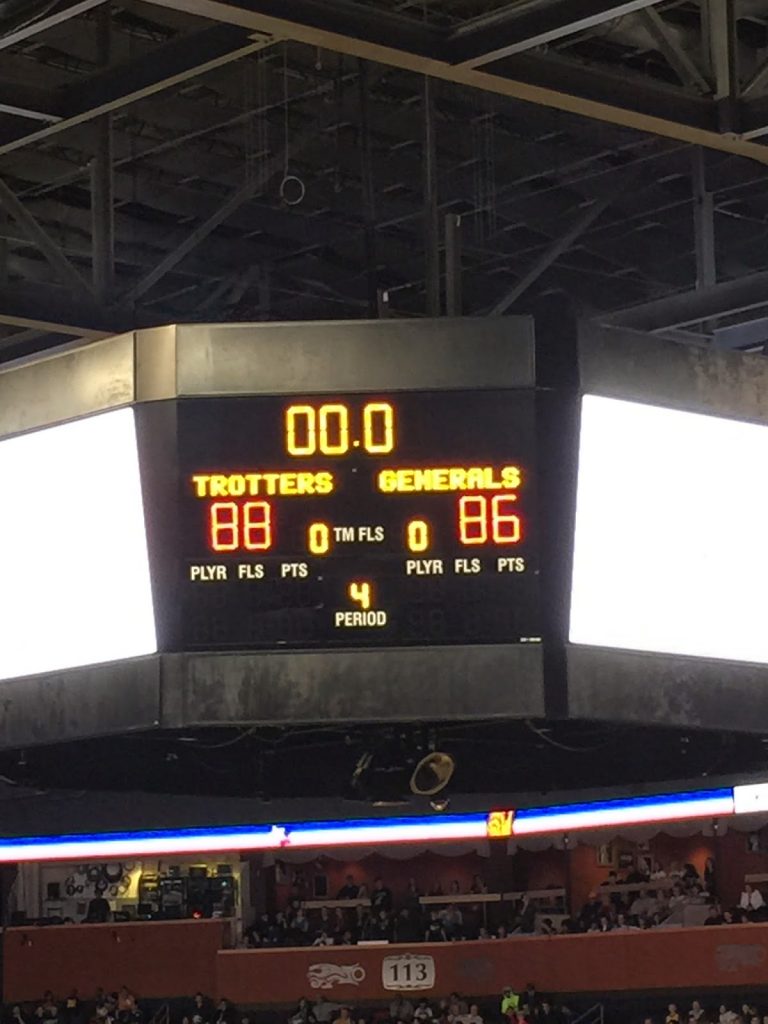 In sudden death overtime, yes in basketball, the Globetrotters WIN!!!!!!  That was close!  😉 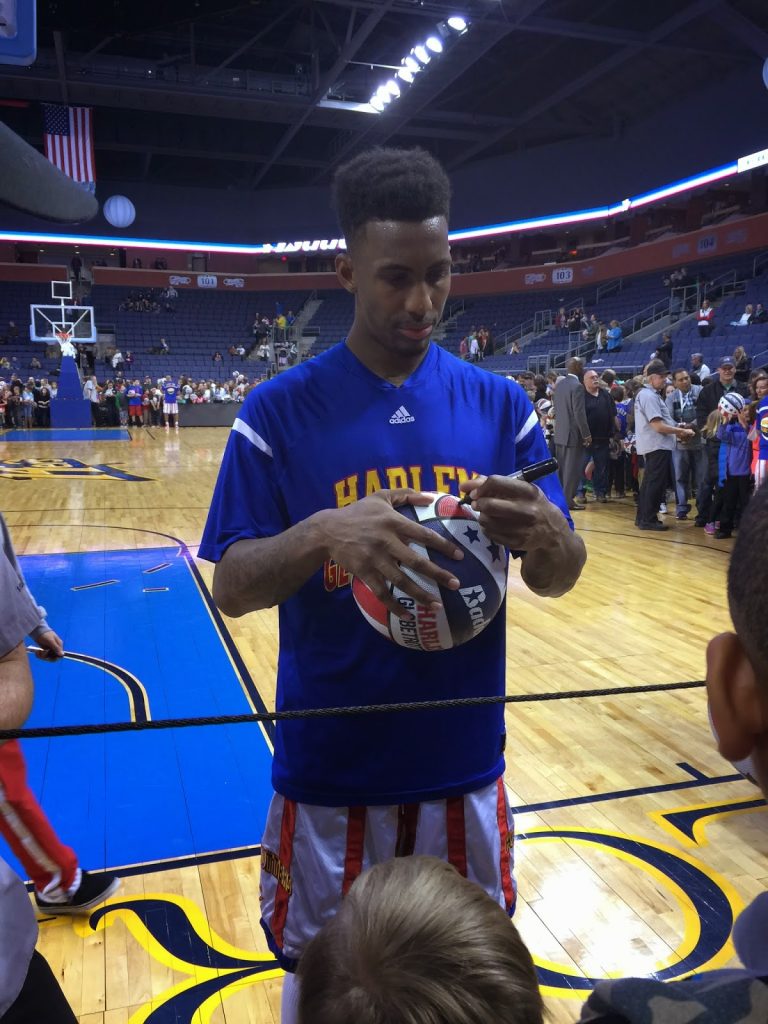 Since we had not been to a game as adults Jeremy and I really didn’t know what to expect for the autograph session and man that was crazy.  For 30 minutes the players stand in one place around the court and you try to get as many autographs as possible!  Hello chaos!!   I am glad we stuck around and experienced this and I know the kids thought it was cool.  Next time we will go early before the game and hopefully get to meet some of the players. 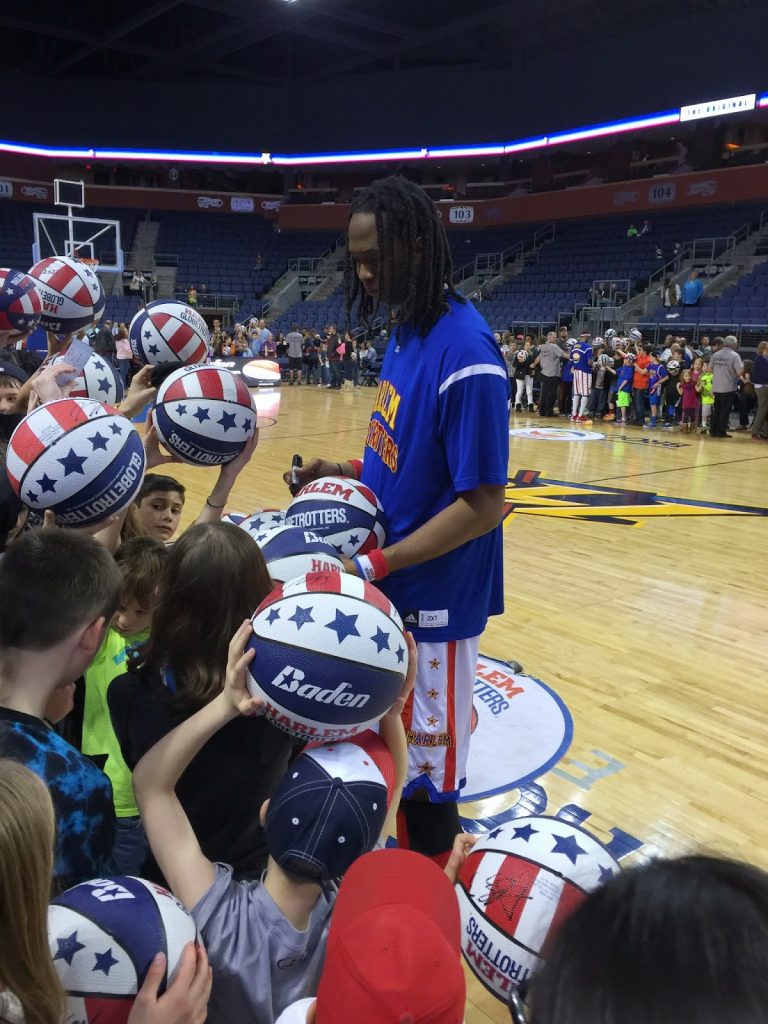 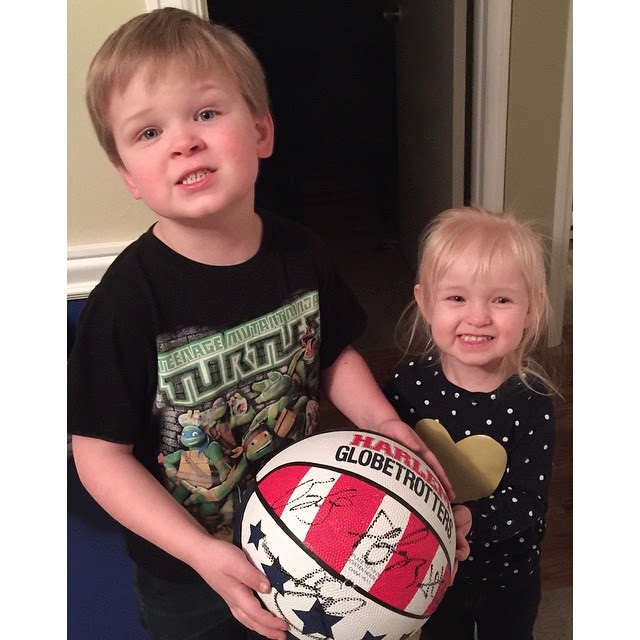 Happy kiddos with their Harlem Globetrotter basketball – look at all of those autographs!!  It was such a fun evening.  I know that we will be doing this again as a family.
There is still time to see these amazing athletes!
Save $7 Off Tickets to the Harlem Globetrotters 2015 Tour. The iconic Harlem Globetrotters are coming to an arena near you with their unrivaled family show, featuring some of the greatest athletes on the planet. Use promo code FAMGUIDE to get $7 off select tickets.

Have you taken your family to see The Harlem Globetrotters yet?