Guest Post By Jeremy – all about his Reef Fishing trip while at the Social Media on the Sand Conference.

So I know what you are all thinking wasn’t going to the beautiful island of Turks and Caicos my largest bucket list item? Yes and no. It was amazing going Beaches Turks and Caicos Resort Villages and Spa and I could go on and on about the resort and everything there, but I will let Censie do that in her other posts. This one is about something I was able to do with a good friend while Censie and the other bloggers were at the conference. 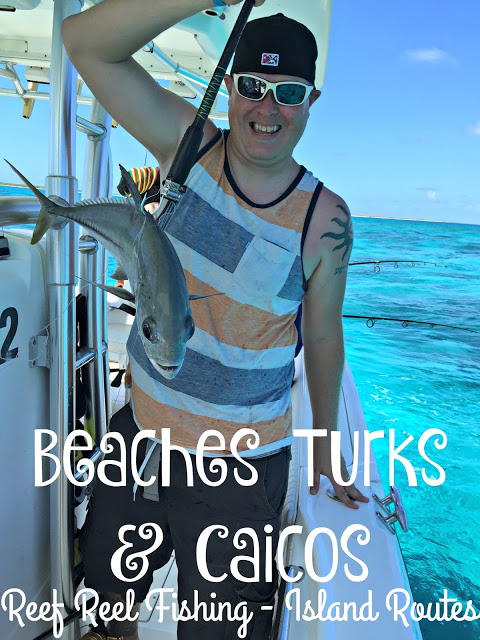 When Censie told me that we were going to the Beaches Turks and Caicos Resort Villages and Spa I immediately jumped on their website and looked around at all the great options of things to do. One of the first things I saw was that they offered several different types of fishing trips. Now I have grown up fishing with my father and grandfather, but that is mountain trout fishing and fly fishing. Something that I absolutely love but this was fishing in the ocean. I mean does anyone see anything not great about this?

When I began looking I was immediately drawn to the deep sea fishing explorations. I had this dream of being strapped in a chair and reeling in a huge Marlin that would end up all over the pages of Facebook. Then reality sat in and I started thinking about it more and more, I have never really been out on a boat, let alone in the ocean. I was beginning to become a little nervous, I didn’t want to be the tourist out on the boat losing it.

This is where the amazing staff at the Beaches Turks and Caicos Resort Villages and Spa come into play. I went to the excursion desk to talk to them about all the options. They ran through all the options and took the time explaining the differences to me. There was the deep sea fishing, bottom and reef fishing, and bonefish fishing. They explained the costs and what was included with each one. I explained that I was a little nervous about being out in the ocean and getting sea sick. They guided me and helped me make the decision of going out on the bottom and reef fishing. It was booked and we were given our confirmation and all that was left was just to be ready and meet the transport.

The morning of the trip we got up ate an amazing breakfast and then went to the meeting area. When we got there the staff greeted us and talked to us about what trip we were going on, there were several trips meeting in the area and we were all excited. There were other fishing trips and scuba trips it was interesting but very well organized. One of the first things we were given was our one day fishing license, this is included in the price of the trip, and we were told to just hang out. Then a van arrived with individuals from another resort and we were told that they were there to take us on our fishing trip. 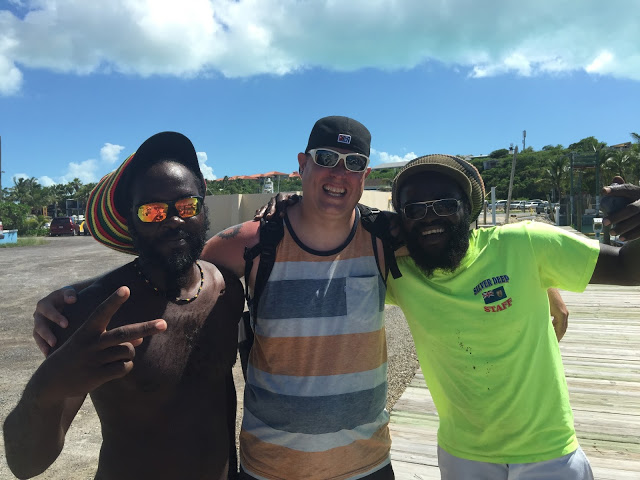 The harbor was only about 10 minutes away. We got there and they explained that if we were from the Beaches Turks and Caicos Resort to head on over to our boat. We were there with 8 other individuals, all but 2 were from our resort. We were greeted by our guides Lucky and Derrin. They were joking and talking to us immediately. It made me very comfortable, I am not going to lie I was a little nervous getting on the boat. They showed us the ropes and explained the boat to us, again the only boat I have really spent any time on is a small row boat, this was a whole new expierence. They took out to begin our fishing. It was beautiful to say the least. Derrin explained to us where he was from and pointed out points of the island where he lived growing up and told us stories, he said that he grew up fishing this area with his father. The water was so clear and I was super lucky they let me sit on the front of the boat I was able to see so much. 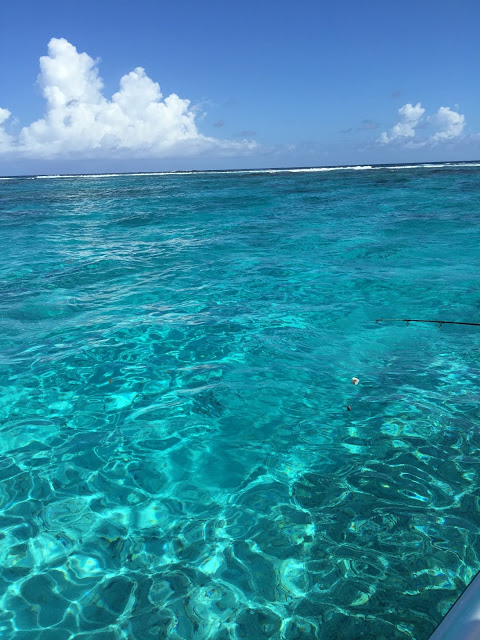 They took us out within the reef to begin our fishing, due to the waves being so choppy we had to stay inside the reef and were not able to go out to the outside of the reef. They said that the reef is about 30 feet wide and on one side of the reef it is about 7 feet deep and then on the other side it is about 7000 feet deep!!! The boats provided all the poles and bait, we just had to fish, talk and drink the occasional Turks Head Beer (my new favorite by the way). 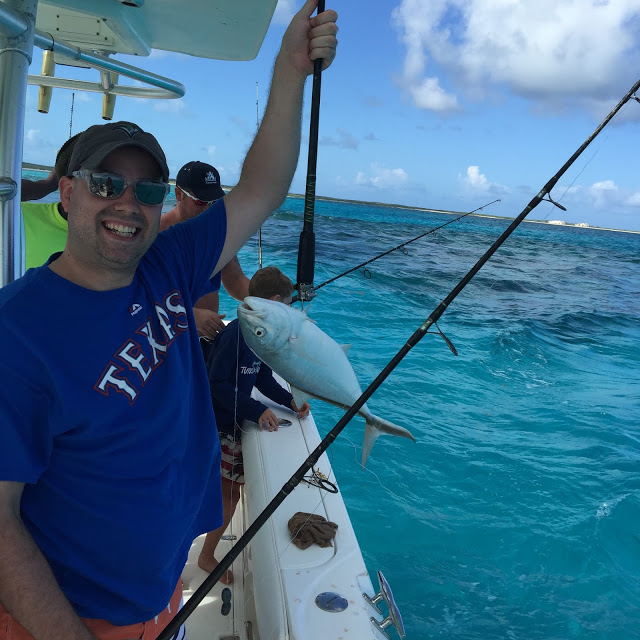 It was great they helped us put the bait (squid) on the hooks and then showed you where to cast out. If you had any problems they would even help you cast. Kyle my fishing buddy told me that he had been fishing many times but not caught anything. Kyle’s first cast what does he do? He catches a fish it was great he was so excited. We made sure to take quite a few pictures, but I am pretty sure that you could not have captured his excitement in the pictures. We continued to fish and he continued to reel in fish after fish it seemed like, and same with everyone around me except for me. I was getting a little nervous. The highlight of our first stop was Monty who is 10 years old and there with his dad catching a yellow tail snapper and as he was reeling it in a barracuda came out of nowhere and takes it right off his line, he was bummed but it was pretty amazing to see. 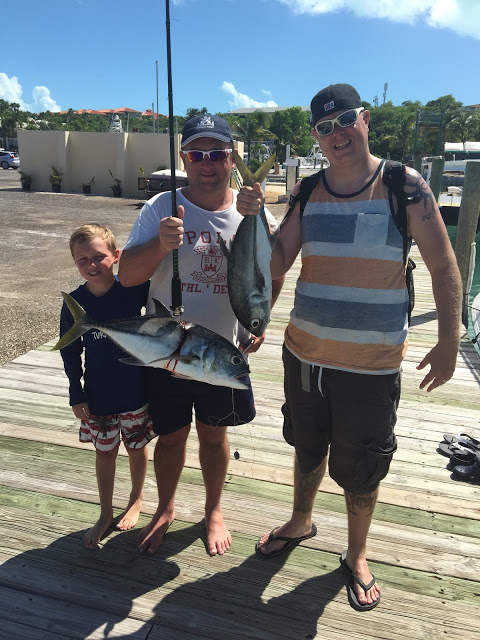 We continued to fish and moved several times to different locations. We caught several types of Grouper, Parrot Fish (we could not keep these as they help clean the reef), French Grunt, Yellowtail Snapper, Razorfish, Blue Tail Jack, and Yellowtail Jack(Horse-Eyed Jack). Lucky and Derrin helped us bring the fish onto the boat, take them off the hooks, and then re-bait the hooks. They were running around like crazy. 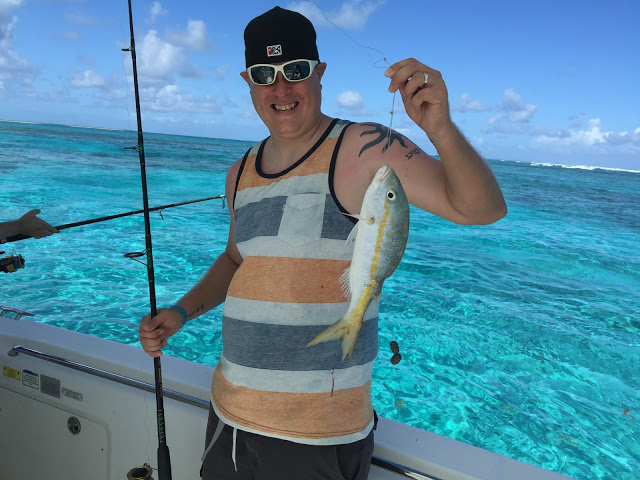 I caught a small Yellowtail Snapper and was just super excited that I finally caught a fish, I was getting worried that I wasn’t going to catch anything. When we got to one of our last spots I threw my line out and then thought I had a bite. I started reeling in and wasn’t getting anywhere, I was afraid that I was caught on the reef, this happened a couple of times before. I was kind of bummed but then as I let go of the reel you could hear the line just start pulling out. I actually had a fish. I was reeling in and my arms were getting tired. I kept hearing Lucky and Derrin saying “Bring it don’t sing it”, in other words bring it into the boat don’t keep saying you have a fish. I was so nervous it was going to get off the line, I got it close enough to the boat and Derrin caught it with the hook and brought it into the boat. I was ecstatic. This was the largest fish I had ever caught in my life. I was taking pictures and on cloud nine. The fish was put in the cooler and kept flopping the cooler open, I just could not believe I had caught this fish. Shortly after I caught my fish another guy on the boat caught another large fish, I have to admit his was bigger but we both agreed that in true fisherman fashion we would say that they were around 400 lbs each! We made sure to get a beer and toast our catch. 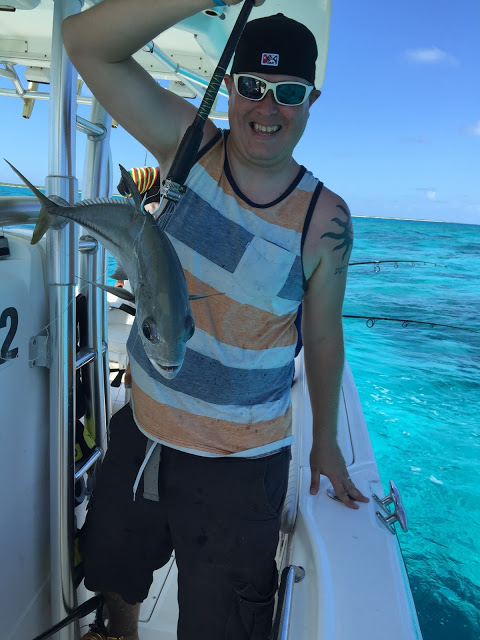 We then wrapped up our day and headed back in. I am pretty sure that everyone caught at least one fish, and many of us caught more than one. We all became great friends by the end and even caught up several times throughout the rest of the trip. At the end of the trip we were presented with the option of bringing the fish back to the resort for them to cook, but we decided against this and allowed Lucky and Derrin either to take it to their family or to the market. 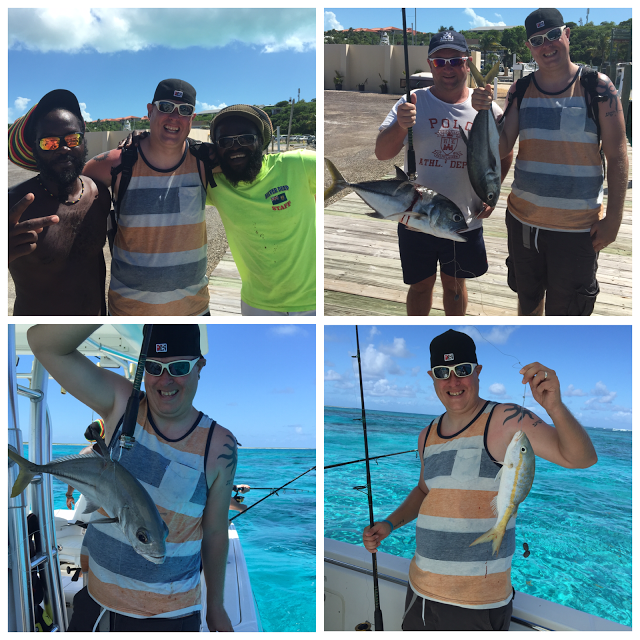 This was amazing trip! Kyle was able to catch several fish, I caught two and had an experience of a lifetime. I cannot thank Beaches Turks and Caicos Resort Villages and Spa for this amazing adventure and experience. Hands down if (when) we get back I will be going on this trip again or maybe try my hand at Bonefish!
Have you ever been on a fishing boat or gone deep sea fishing?


Disclosure: This excursion was not included in the all-inclusive stay at Beaches Resorts.