For all the latest updates straight to your inbox
Home » Blog » parenting » Our Taekwondo Star, Jude
0 shares

Last weekend Jude had another belt testing for his Taekwondo skills.  He did fantastic this testing – he even knocked over and older more advanced boy during his sparing during testing.  So fun!  He was very proud of himself.

Just like with every testing cycle we have seen some major improvements in Jude.  While we do struggle with some emotional control I believe that Taekwondo is truly helping with Jude’s overall behavior and maturity.  Plus the activity is really good for him too.

Jude is still in the “Tigers” program at ATA Taekwondo but he is moving up. This weekend he earned his Raon the Lion belt. This is the seventh ATA Tigers Belt! It is white with a plain camouflage stripe through the center.  SEVEN belts!!  Go Jude!! 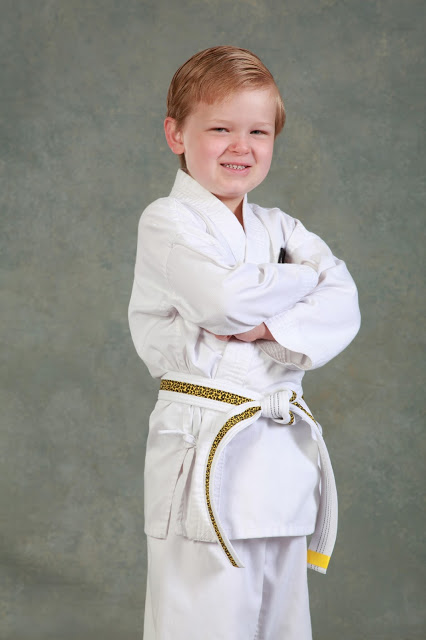 This year his Taekwondo School had professional pictures.  Here are a couple that we really liked.  He looks so strong and confident.

His favorite part about being in the Leadership program is getting to have time to learn the weapons.  Such a boy!
We are so proud of his accomplishments in Taekwondo and look forward to many more in the coming months.  Good job Jude!!!
Do your children participate in a martial arts program?  If so, which one?