For all the latest updates straight to your inbox
Home » Blog » book review » Rick Riordan’s The Trials of Apollo #4: The Tyrant’s Tomb In Stores Now!
29 shares

Disney Book Group sent me a copy to check out and is partnering with me for a giveaway to celebrate Rick Riordan’s The Trials of Apollo #4: The Tyrant’s Tomb! All opinions expressed are 100% my own. 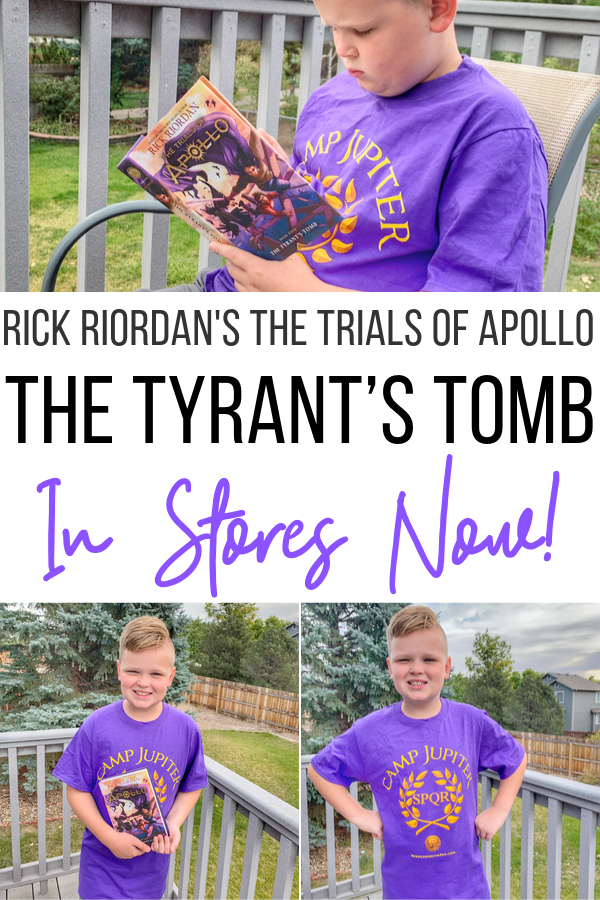 Books For The Greek Mythology Lover

Jude is an incredible reader.  The amount of books that he has read in the last few years is a bit unbelievable.  I am so happy that Jude loves to read and because of that I am always excited when we find an author or series that he cannot put down.   Earlier this year we were introduced to Rick Riordan and his Percy Jackson series.  Jude read those books so quickly and started wanting to learn more about Greek mythology.

Once he was done with the Percy Jackson series we moved onto more of Rick Riordan’s series and he instantly feel in love with those as well.  One of those series is The Trials of Apollo series.  Knowing that Rick Riordan is still working on this series has us excited to see what is next.  Jude loved the first 3 books of The Trials of Apollo series so when we found out the 4th book would be delivered he was anxiously waiting for the delivery!

Rick Riordan is a phenomenal writer and I can see his passion for his books through Jude’s eyes and excitement when he is reading.  Rick Riordan’s books are always full of fantasy, mythology, and fun.  Since Jude has started reading Rick Riordan’s books it has also prompted him to do a lot of research on Greek and Roman Mythology.  I love that a little fantasy reading has turned into an educational search for him.  Win in my book and I am one proud mom of Jude’s reading accomplishments. 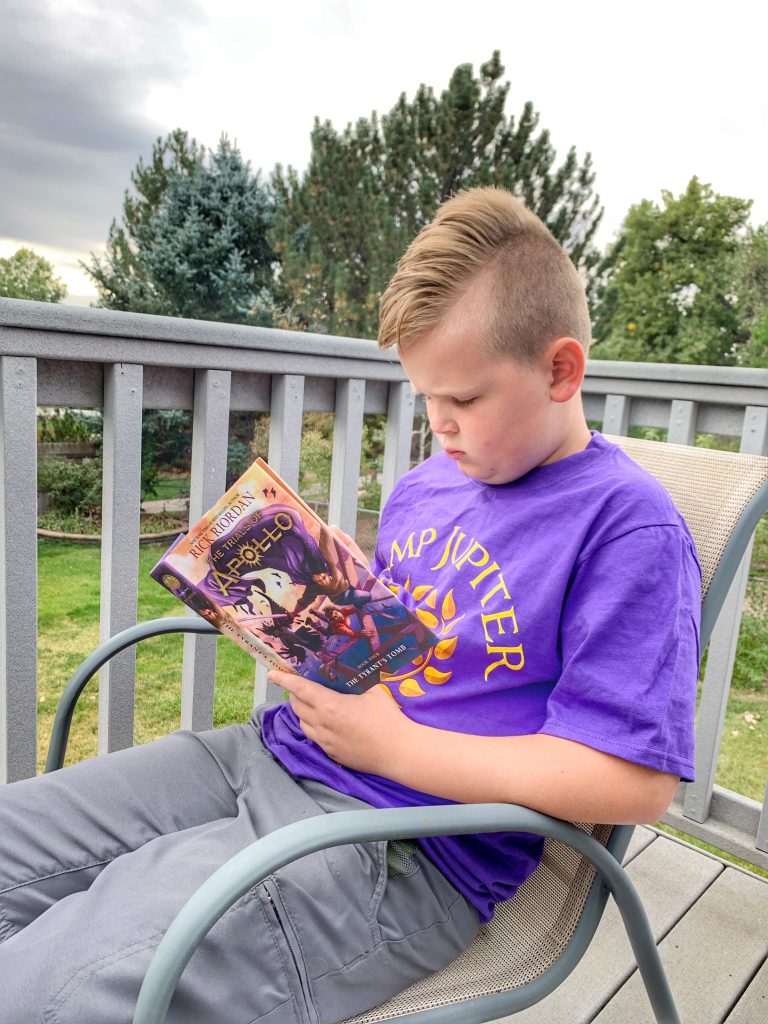 The Trials of Apollo #4: The Tyrant’s Tomb In Stores Now!

Rick Riordan always incorporates all different people and characters in his books, I love hearing Jude talk about the inclusivity and diversity of the characters.  I know that these simple but intentional additions to the books and stories is a great way to promote to kids that all people matter and we need to love and be kind to everyone we meet.

Apollo narrates this adventure which gives a great and godly point of view! The disparity between his godly assumptions and his disappointing reality is hilarious.  I know I will hear Jude laughing on the couch while he is reading this – is there anything better than hearing laughter from you child while he is reading?? Jude was super excited to read that all of the beloved characters from the Roman Camp Jupiter will aid Apollo in his quest in The Tyrant’s Tomb. I cannot wait to hear how Jude enjoys The Tyrant’s Tomb! 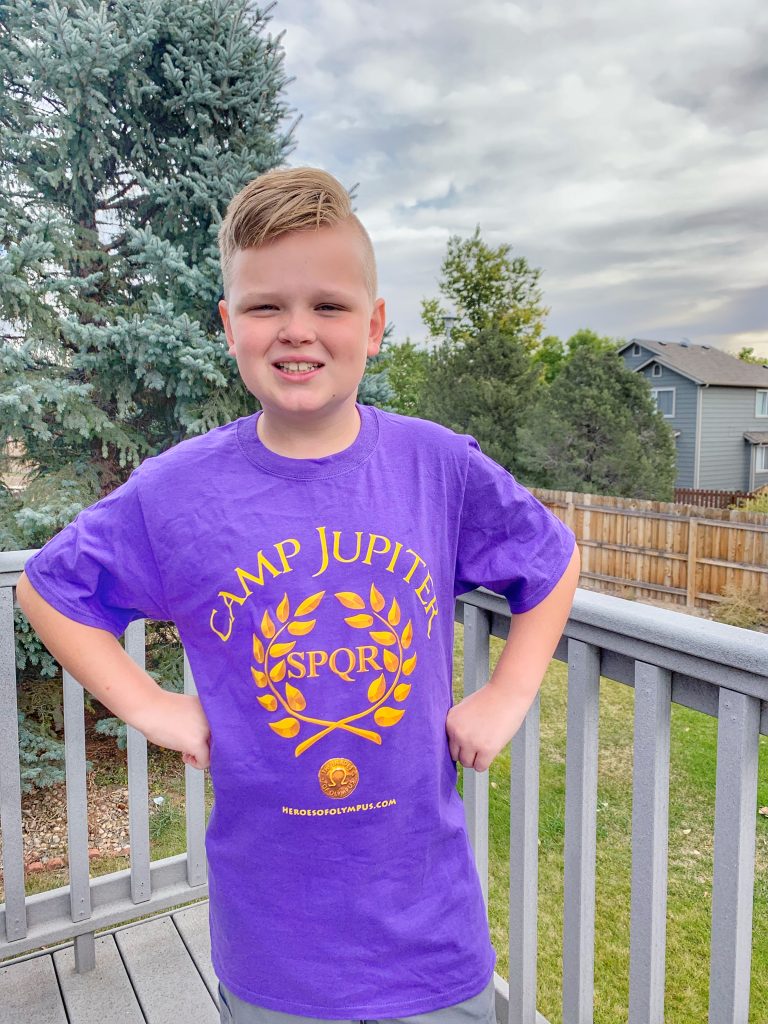 About The Trials of Apollo series

After angering his father Zeus, the god Apollo is cast down from Olympus. He lands in New York City as a mortal teenage boy. Now, without his godly powers, the deity must learn to survive in the modern world until he can somehow find a way to regain Zeus’s favor.

In his penultimate adventure, a devastated but determined Apollo travels to Camp Jupiter, where he must learn what it is to be a hero, or die trying.

It’s not easy being Apollo, especially when you’ve been turned into a human and banished from Olympus. On his path to restoring five ancient oracles and reclaiming his godly powers, Apollo (aka Lester Papadopoulos) has faced both triumphs and tragedies. Now his journey takes him to Camp Jupiter in the San Francisco Bay Area, where the Roman demigods are preparing for a desperate last stand against the evil Triumvirate of Roman emperors. Hazel, Reyna, Frank, Tyson, Ella, and many other old friends will need Apollo’s aid to survive the onslaught. Unfortunately, the answer to their salvation lies in the forgotten tomb of a Roman ruler… someone even worse than the emperors Apollo has already faced. 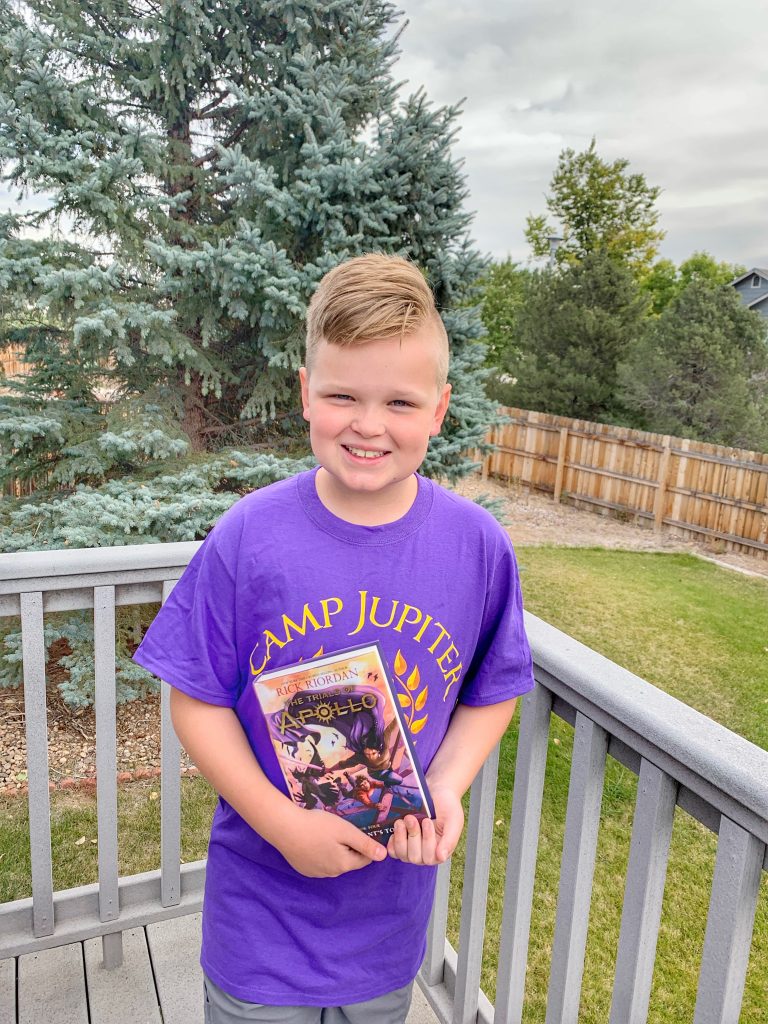 Rick Riordan, dubbed “storyteller of the gods” by Publishers Weekly, is the author of five #1 New York Times best-selling middle grade series with millions of copies sold throughout the world: Percy Jackson and the Olympians, The Heroes of Olympus, and the Trials of Apollo, based on Greek and Roman mythology; the Kane Chronicles, based on Ancient Egyptian mythology; and Magnus Chase and the Gods of Asgard, based on Norse mythology. Rick collaborated with illustrator John Rocco on two #1 New York Times best-selling collections of Greek myths for the whole family: Percy Jackson’s Greek Gods and Percy Jackson’s Greek Heroes. Rick is also the publisher of an imprint at Disney-Hyperion, Rick Riordan Presents, dedicated to finding other authors of highly entertaining fiction based on world cultures and mythologies. He lives in Boston, Massachusetts with his wife and two sons. 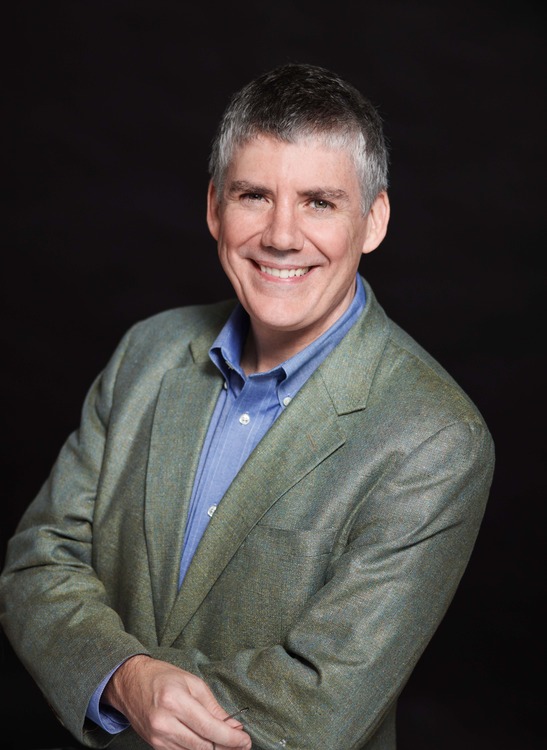 I am excited to announce that one of my readers will get the chance to win the first three books in The Trials of Apollo series and the newest release, The Tyrant’s Tomb, plus some branded goodies including; a puzzle, pencil, and Camp Jupiter t-shirt!   Giveaway open to US addresses only.  Prizing and samples provided by Disney Book Group.   Giveaway open 10/9/2019 – 10/14/2019.

To enter use Rafflecopter Form below: 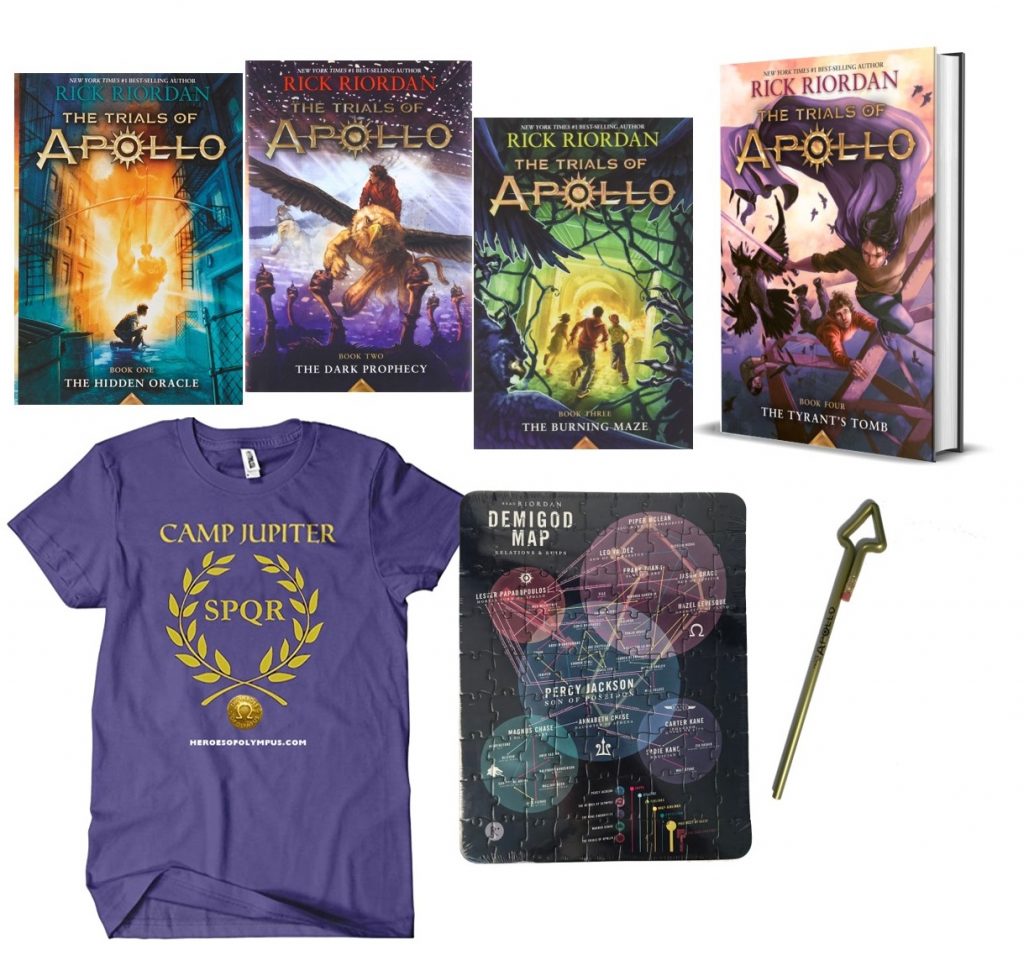 The Trials of Apollo #4 is in book stores now – make sure you buy your copy today! 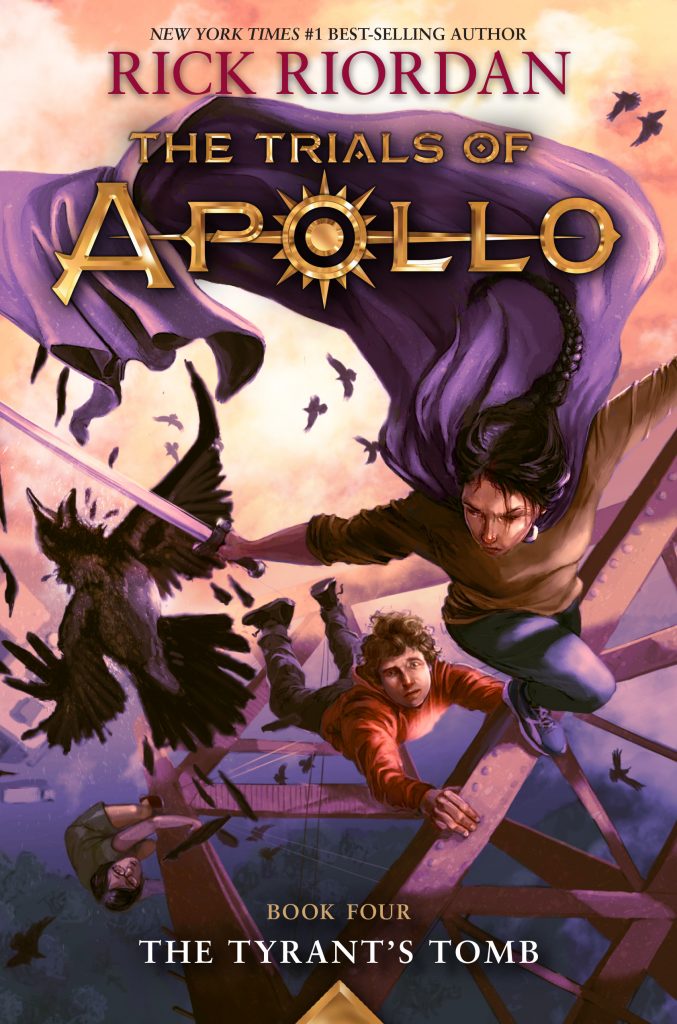 Is this a series your kiddos would love to read?